There’s no shortage of ways to improve the city 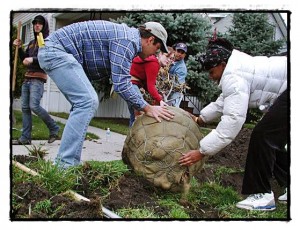 Beneath its gorgeous design, though, what is it really offering to Hamtramckans, in terms of concrete ideas to improve the lives of its residents?

Plenty, if you ask Community and Economic Development Director Jason Friedmann – which we did. He has a great feel for the somewhat overwhelming study, and thus was able to detail the numerous recommendations in succinct, bullet-point fashion.

The larger portion of the Master Plan is devoted to the recommendations being made by the staff at Interface Studio, the company hired to coordinate the plan. They have broken these recommendations out into six separate areas.

The areas are Physical Improvements, Public Services and Facilities, Transportation, Recreation and Open Space, Housing, and Cultural and Economic Development.

For Physical Improvements, some of the practical recommendations included highlighted entryways into the city (Hamtramck is already debating cheap ways to begin this process, such as with welcoming messages that can be painted onto the pavement of the streets themselves), improved lighting for pedestrian safety, planting flowers on vacant lots, more trash cans, and other surface pretty-ups.

The more monetarily-challenging items given included demolishing abandoned and blighted structures, and some extensive tree planting – incredibly, even Detroit’s tree canopy coverage blows Hamtramck’s away, with 28 percent of Detroit shaded by its large, older trees, compared to a mere 8 percent in Hamtramck.

To be fair, though, over 500 trees were knocked down in Hamtramck by the 1997 tornado.

Some of the desired items within the area of Public Services and Facilities will also be pricey to implement, Friedmann admits. Re-doing the sewer system, for example, will be a huge project, although first the city would like to train the appropriate people to better understand the way the storm water flow works here in town.

Another element in this area, and one related to the tree canopy issue, is to create more “green roofs,” or in other words, roofs protected with ground-cover vegetation and small shrubbery. Anyone who has toured the Ford Rouge Truck Plant has perhaps noticed what they have been able to do with their buildings. Hamtramck’s project would ultimately be on an even grander scale.

The ideas regarding Transportation may not tickle the ears of the town’s speeders, but one of the main things the city wants to do is slow down traffic. This would not only increase safety, Friedmann said, but could be a boon to the businesses along Hamtramck’s main drags, in particular. You thought they were writing a lot of tickets now?

There will be a prioritizing of the reconstruction or repaving of the streets in town, graded 1 through 5, with those needing work the most earning the higher number. Conant, Holbrook, and parts of Caniff qualify as routes needing more immediate attention.

Friedmann said that the city would also like to help make it easier for alternative methods of transportation, for example by the creating of better bicycle lanes. The necessary keeping clear of the alleyways in town, particularly those running parallel to the main streets, will involve more aggressive code enforcement against trash dumpers, he suggested.

For Recreation and Open Spaces, one quick short-term plan was a push to rejuvenate the Friends of Parks preservation group. Freidmann’s office is also in touch with Wayne County regarding sending some of the county’s work crews here to help clean up these areas.

Veterans Park on the city’s southend merited particular mention, both as a park in need of some TLC, as well as one that Friedmann would like to see made more welcoming.

“You can’t even really see all the way into it, to the back of it,” he noted. This makes people leery of using the space for its intended purposes, he said, even as it makes it a haven for street people, gangs of bored teens, or more nefarious elements.

For the area of Housing, the emphasis would be on improving existing structures, many of which are good, big, solid homes able to, in some cases, house multiple families easily.

One sticking point in this area is that the city needs to see the resolution of the long-standing housing discrimination lawsuit, a lawsuit that is impeding the city’s ability to build on, or else sell off, the 400-some-odd lots that they currently hold.

Lastly, in the realm of Cultural and Economic Development, the focus will be on creating an attitude of getting new businesses to set up, and then thrive, here in town.

Cities like Hamtramck succeed when they highlight their unique aspects — the things that people know them for, Friedmann went on to say.

Much of Hamtramck’s “tourism,” both local and beyond, is generated by either its food or its well-known festivals. Friedmann wants to see other businesses drawn here, and doing well here, beyond what he refers to as “just the primary market cycle.”

One omission to the plan that may seem glaring is the lack of mentioning the schools. This, Friedmann says, is due to the fact that the schools are required to have their own plans in place, and must answer to the state with regard to them.

One must admit, it’s all a heady brew of the possible, the desirable and, perhaps, a little pie in the sky. For his part, Friedmann seems energized by the plan. The best thing about it, he has stressed, is that there are all levels of “fixes” laid out in there that make sense, and some of them are simply based on organization, out-of-the-box thinking, or good old fashioned sweat labor. The more ambitious aspects will take time and certainly money as well, but should in turn more than repay the investment with the dividends of a revitalized Hamtramck.

Hamtramck – an original jewel, we hopefully all agree, worth polishing. And now, with a solid plan to do just that.