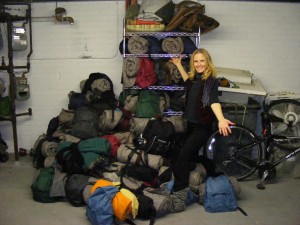 By Ian Perrotta
Review Staffwriter
It looks like Mother Nature finally got the memo and winter has arrived. Fortunately for Detroit’s homeless, the Burners without Borders organization was already here.
What exactly does that mean? It means that thanks to the organization, over 100 of the local homeless population will be provided with a survival backpack to help combat the harsh Detroit winter.
It all started back in 2005, after the Burning Man festival in Nevada. That was the year of Hurricane Katrina, and when festival revelers saw what was happening – or more precisely what wasn’t happening – they banded together in an effort to help the citizens of New Orleans. Those “Burners” sought to minimize the devastation caused by the hurricane by lending their expertise in survival camping to the victims of the storm, as well as pitching in wherever else their help was needed.
Flash forward five years, and not much – other than location and organization size – has changed. Work continues to be donated where needed, and chapters have sprung up on five continents.
Locally, the Detroit chapter has been a pet project of Hamtramck resident Danielle ‘doxie’ Kaltz. Last Sunday (Jan. 10), she hosted a “Backpack Packing Party” in the basement of her Trowbridge apartment, and with the help of over a dozen volunteers stuffed over 100 backpacks with some basic survival essentials.
“We’ve been real fortunate that the winter has been mild, with no negative-degree temperatures and overwhelmed shelters so far,” says Kaltz, “but that doesn’t mean help isn’t needed.”
That help can certainly come from the backpacks, which were put together by an assembly line of volunteers. Each backpack was stuffed with socks, gloves, a hat, juice, water, a Nutri-Grain bar, four-to-five canned goods from various food groups, a can opener, a toiletry pack that included toothpaste, a toothbrush and ChapStick, and a poncho. FEMA emergency blankets were then tied to the packs with a scarf to finish them off.
“The backpacks are a great way to bridge the gap between the haves and the have-nots,” Kaltz told the group of volunteers. “They make it easier and safer to approach the homeless. Especially if you’ve never done it – all you have to do is roll down your window and say ‘Hi’. Just be sure to ask them their name, and tell them yours. It makes them human.”
That’s the type of enthusiasm that literally has strangers coming up to Kaltz and offering to assist her endeavor. Indeed, several volunteers were unacquainted with Kaltz before Sunday, and even the supplies came from people eager to help. The actual backpacks were purchased with a generous cash donation, and over 300 pairs of gloves came from Angela Palaian, who collected donations for the backpacks at two recent events she coordinated.
“The fact that doxie is intuitive enough of a person to walk outsiders through such a foreign process – fundraising, organizing, and street outreach – speaks a lot about her humanity. This is exactly why I want to do things for her. She knows how to treat people with love and respect.”
The backpack packing event was so successful in generating donations that there were actually several bags of clothes and other supplies that were unable to be packed away. Nothing went to waste, not even the bags that the clothes came in. The extra supplies were donated to the United Peace Relief, which will distribute them throughout the homeless community utilizing a bio-diesel bus under the guidance of Jean Wilson.
If you’d like to help the Burners without Borders cause, feel free to contact Danielle Kaltz at doxiedetroit@gmail.com or call her at (313) 608-4580.