This year’s Hamtramck Festival has some new features 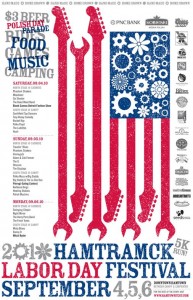 Next week is the Hamtramck Labor Day Festival, and if you think you’re in for the same old festivities as in years past, you’re only partially right.

You’re only partially right because, yes, while there will be food, music, rides and games, this year’s festival features so much more.

The biggest change to the weekend is the addition of Camptramck, a campground that will be located at Veterans Park. Open from Friday (Sept. 3) at 5 p.m. through Monday (Sept. 6) at 8 p.m., Camptramck is the place to be when you’re not reveling at the festival. With weekend passes just $25, single night camping passes for $10 and a day passes at $5, it’s an affordable way to experience the festival in a whole different light.

If anyone is concerned about the logistics of camping in the city, it looks like everything is covered. Security will patrol the campground for the duration of the festival – as well as the parking lot in Veterans Park, which will be available for use by the campers – and color-coded bracelets will prevent any unauthorized persons from entering the premises. And though there won’t be electricity at every site, there will be showers available for use.

A perfect precursor to a night at Camptramck is the Hamtramck Pub Crawl, which will occur on not one, not two, but three nights over the course of Labor Day Weekend. On Friday, Saturday and Sunday from 9:30 p.m. to 2:30 a.m. the pub crawl will make its way through the best bars that Hamtramck has to offer. The best part is that the eco-friendly bus The Night Moves will be driving participants all around town.

For those who are more athletically-inclined, this year’s festivities will also include the first Labor Day Fun Run, which will be held on Monday at 8:30 a.m. Put together by the Detroit Threads Running Team, there are two distances to chose from – one mile and five kilometers. Entry in the one-mile fun run is just $5, and the 5K –the “Gołab-K – is just $15. Children under 10 years old are free, and anyone who pre-registers will get a free commemorative T-shirt.

Finally, this year’s festival will bring back the almost-forgotten tradition of the Hamtramck Yacht Club Canoe Races, to be held on the raging rapids of the Jos. Campau. Well, OK, there isn’t any water on Jos. Campau, but the races will be pretty rapid and are sure to be all the rage. Teams of bar patrons have banded together to create push-kart like vehicles that will compete for bragging rights by completing the course in the fastest time. After the initial first race, which includes three heats with four or five karts, the winners from each heat will face-off in a final showdown for true Hamtramck Glory (yes, with a capital ‘G’).

So there you have it – the rest of the story for this year’s Hamtramck Labor Day Festival. And if it seems like a lot of this sound strikingly familiar to what you read last week, then good – now you don’t have a reason to miss any of the great events that will truly make the 2010 celebration one for the books.