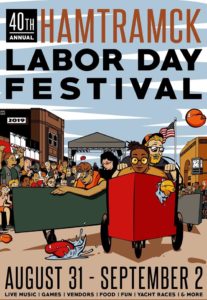 By Charles Sercombe
The Hamtramck Labor Day Festival is just five weeks away.
Sorry, we don’t mean to be a downer, but July is just about done with, and summer is winding down.
Anyway, the festival organizers have released this year’s festival poster.
It was done by Hamtramck resident Dave Toennies (aka “Ton Yes”), who is a former automobile designer.
This year’s poster features something that has grown to be almost a bigger event than the festival itself: the annual canoe race.
The race is held on Monday morning (Labor Day) right before the Polish Day Parade.
It has been attracting more and more onlookers in recent years. For those unfamiliar with it, the canoes are sort of shaped like canoes, but which are fitted with wheels and manned with two team members.
One does the pushing, and one does the sitting in the “canoe.”
The highlight, though, are the hijinks of the onlookers who are encouraged to throw water balloons at the race participants, and heck, even each other.
It’s wet, rowdy and a little boozy.
Pure Hamtramck.
But it is family-orientated, don’t get us wrong, and there are plenty of kids who attend and get excited about throwing water balloons at adults.
As for the poster, Ton Yes said he purposely focused on the race.
“I had a couple reasons for wanting to focus on the canoe race for the poster. For one, it’s just such a unique event. It’s iconic, right?” Yes said. 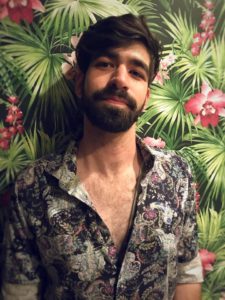 “People see one of those canoes and they know exactly what it is and where to find it. Obviously, Labor Day is a pretty busy weekend in the Detroit area, and there’s a lot of festivals that offer live music and games and food and the like — but none of the others have anything similar to the canoe races.
“I think it’s cool that it’s something that everyone can enjoy, no matter your age, and it’s got the crowd participation aspect going too.
“The other big reason was that I wanted to try to do an image that was different than the subject matter of past fest posters, so that I wasn’t just rehashing something we’d done before.
“I went looking through some of the more recent ones, and noticed that the races hadn’t been the focus for the poster before, and decided to run with that.”
This year’s festival is Aug. 31-Sept. 2.
July 26, 2019