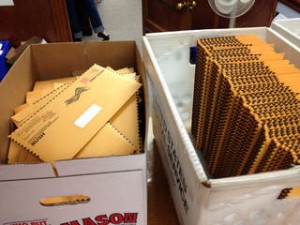 The Attorney General’s Office said it would act quickly in its investigation into various allegations of illegal election activity in the August Primary Election.

A week after the AG took up its investigation, the first round of charges were announced on Wednesday.

Three Hamtramck men face felony charges of delivering absentee ballots to the city clerk’s office from people not related to them or members of their household.

State law says that those who vote by absentee ballot can deliver the ballots themselves, through the mail or by a member of their immediate family or a household member.

Anyone else delivering the ballots is unauthorized by law.

The investigation had originally been handled by the Hamtramck Police Department after Deputy City Clerk August Gitschlag reported three men illegally dropped off a total of 48 absentee ballots.

The result of the investigation went to the Wayne County Prosecutor’s Office, which turned it over to the AG’s office. In the meantime, those ballots were counted in the primary election.

One of the men, Armani Asad, 33, was an unsuccessful candidate for city council.

The other men charged are Mohammed Russell, 32, and Salim Ahmed, 50.

If convicted, they face a maximum penalty of five years in prison and a $1,000 fine.

Arraignment was scheduled for Thursday, the day The Review went to press. According to the AG’s office, the men will have to come up with 10 percent of $10,000 for bail in order to stay out of jail while further legal proceedings take place.

Speaking about the charges, Attorney General Bill Schuette said in a press release:

“Preserving the integrity of the voting process is vital to maintaining the foundation of our free democracy. On election day, voters cast their ballot to make sure their voice is heard. We will not tolerate election law violations.”

An investigation into allegations of fraud and ballot tampering continues.

At last week’s Board of Canvassers meeting in Hamtramck, which was held to confirm a ballot recount of the mayoral election and the race for the two-year term on city council, the two candidates who requested the recount said they were offered money in exchange for votes.

Cathie Gordon, a city councilmember who ran for mayor, also said that because there was a much higher than usual number of absentee votes, there was a likelihood of voter fraud.

Hamtramck has a large Muslim voting bloc, and during Ramadan Muslims fast during the day, and many sleep through the day or restrict their movements to avoid becoming thirsty.