Time to get ready for the big ‘sweep’ 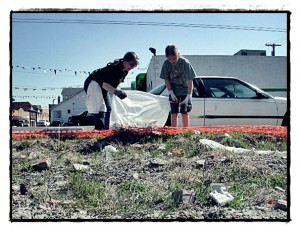 It’s time to dust off that, uh, dust. Spring is in high gear and community clean-ups are in the air.

Starting tomorrow (Saturday May 8) there will be plenty of opportunities to spruce up the city and get to know your neighbors. The South End Block Club will kick things off with the first of its “second Saturday of the month” clean ups. The event, which will target the area west of Jos. Campau and south of Holbrook, begins at 9 a.m. with a meeting at People’s Community Services (PCS) and ends at 2 p.m.

On Monday (May 10) the East Side Block Club will be hosting a carry-in dinner and home safety and crime prevention presentation from 6 to 8 p.m. at the Our Lady Queen of Apostles Community Center. All members of the community – even those outside of the block club’s area – are invited to attend and bring a meat, vegetable, salad or dessert dish to share.

The big event for the city is the upcoming “Hamtramck Clean Sweep” on May 15. The annual affair, which begins with a meeting at 10 a.m. at PCS and runs until 5 p.m., covers the entire city and is a perfect way to get involved in the community.

With generous support from Platinum Landscaping, the Hamtramck Housing Commission, Acts 29, Real Church, Weed and Seed and many others who provide equipment and manpower, the day brings back the time when the city was known as the cleanest in America. There will be dumpsters stationed in all corners available for use by the public, and supplies on hand for use by volunteers.

“It’s a great way to meet your neighbors and help out the city,” says event coordinator Eve Doster-Knepp. “When the city is clean, everyone in Hamtramck benefits.”

Also going on during the Clean Sweep will be the repainting of a mural on the southend viaduct. The effort is led by Hamtramck Detective Jackie Crachiola, who organized the original painting of the site’s current mural several years ago when the viaduct was smeared with graffiti. At that time, kids from the city painted an American flag and then put their hand prints around it.

Crachiola wanted to prevent blight, and for the first five years no one sprayed any graffiti over it. Eventually, the graffiti caught up, so last Tuesday (May 4) she power-washed the wall to prep it for the new mural. With help from an art teacher at the high school, the new mural will not only be an American flag, but will include the flags of all the nationalities in town. She invites all to participate:

“If you want to come out and paint, stop by,” she says.

After the clean up finishes around 4 p.m., the last hour will be devoted to celebrating the accomplishments of the day. An assortment of food and drinks provided by local vendors and a brief awards presentation will wind things down.

But the efforts to spruce up the city don’t end there. Later on this summer, the city will sponsor a “bulk pick-up day” to collect larger items like furniture and appliances to be hauled away. The date has yet to be determined. And in another project in the works, there is some talk of rehabilitating the stadium at Veterans Park. Stay tuned for more information on this and other exciting projects taking place in the coming months – it’s shaping up to be a very busy summer.

2 Responses to Time to get ready for the big ‘sweep’