Titus Walters: A passionate voice for Hamtramck has now been silenced 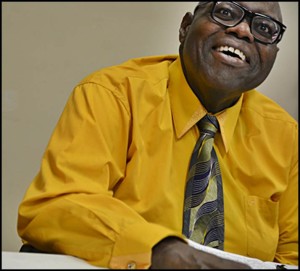 City Councilmember Titus Walters died last Sunday at the age of 52. He previously served as president of the Hamtramck School Board. Walters had a passion for the city and its children.

By Charles Sercombe
After battling ill health for the past several months, City Councilmember Titus Walters succumbed to a failing heart.
Walters, 52, died last Sunday while in hospice care.
Prior to being elected to city council in 2013, he served several years as president of the Hamtramck School Board.
He was passionate about Hamtramck and its children.
Mayor Karen Majewski said Walters “wore his heart on his sleeve.”
“Titus … loved his family, his students, his church, and his community and who let that love guide him in everything he did,” Majewski said.
“Few of us manage to touch so many lives in so short a time on earth as Titus has. I’m profoundly grateful for having had the opportunity to know and work with him over the years. The spirit of conviction he embodied will continue to be an inspiration and provide a role model for people of all backgrounds and generations. On behalf of the City of Hamtramck, I extend my sincere condolences to his family and loved ones. We will all miss him deeply.”
Hamtramck School Board President Maggie Srodek credited Walters for helping her follow his role as board president.
“Titus was a mentor and a friend,” Srodek said. “It’s a great loss for both the school district and the city. He gave his all when it came to Hamtramck.”
Walters’ election to the city council was a historical occasion.
It had been 91 years since the last African-American (Dr. James Henderson) had been elected to the city council.
Technically, the first African-American (Ordine Toliver) to serve on council was back in 1920 when Hamtramck was not yet incorporated as a city and instead was a village.
Henderson served on the very first council (1922-1924) when Hamtramck officially became a city.
The only other African-American to serve on council was William Hood, when he was appointed to the position to fill a vacancy about eight years ago.
The black community has historically comprised about 13 percent of Hamtramck’s total population, but only a handful from that community attempted to seek public office over the decades.
Walters downplayed the significance of his election, telling The Review:
“I never look at color, but I know the importance of it,” he said, and added: “You have to be a leader for the whole community.”
Walters was also a deacon at Corinthian Baptist Church.
While Walters had a deep devotion to the city and his church, he also at times displayed a fiery temper and could lash out at fellow elected officials.
However, if he felt he had crossed a line he would not hesitate to apologize. Walters was also critical of the constant in-fighting in Hamtramck politics and campaigned on a promise to end the division.
“We’re all God’s children, we’re all one people and we have to quit this,” he said at a candidate forum before being elected.
Funeral services for Walters will be this Saturday (Oct. 3), 10 a.m. at Corinthian Baptist Church, 1725 Caniff. Family hour starts at 9 a.m. before services.
On Friday (Oct. 2), viewing will be from 4 to 8 p.m. at Butler Funeral Home 12140 Morang in Detroit.

7 Responses to Titus Walters: A passionate voice for Hamtramck has now been silenced