To Join This Club, Just Jog Alongside 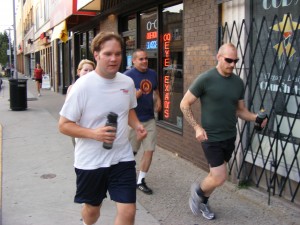 The mayor might be in charge of Hamtramck, but once a week the crew from the Detroit Threads Running Team runs this town.

Every Wednesday at 7 p.m., the Detroit Threads Running Team meets outside of Detroit Threads on Jos. Campau and runs to Keyworth Stadium. And though their name may suggest an organized group that, well, runs, it’s anything but a jog through the park.

Actually, it’s more of a jog to the park, for a series of workouts. What began as friendly rivalry in the spring between pals Mikel Smith (owner of Detroit Threads) and Dan Omans has now become an informal all-inclusive opportunity to get in shape.

Starting with an informal run through Hamtramck earlier this year, the group has since grown in size and become more organized. Things really picked up in June when the team sponsored its very own pub run around the town.

It’s kind of like a pub crawl, but with a lower net-gain of calories. The run visited five bars over five miles, and by the end of it things may have been blurry, but it was clear that some kind of run should happen again.

The beer has since been replaced by water, the distance has been trimmed, and additional physical activity has been added, but the good times remain. It all keeps in line with Omans’ goal for the club.

“We want to interest people in running. A lot of people have come with no experience, and some are now doing half-marathons and marathons,” he says. “We try to make it all-ability, try to be a resource to get new people to join the sport or at least to be more active.”

What he means by “all-ability” is that anyone can join. You don’t even have to run — you can be on the Detroit Threads Running Team and walk.

The purpose of the team is to encourage and stimulate physical movement. Judging by the response of Laura Kemp, who recently joined the team, it has succeeded.

“When I started I was sore for a week,” she says, “but now I feel ready to work out, more motivated to get in shape.”

In addition to the jog from Detroit Threads to Keyworth, regular activity includes stretching, sprinting, running stairs and a light workout. And throughout the session, like an aerobics instructor, Omans’ encourages and motivates the crew as he moves along with them.

So far, about 40 different people have turned out to run with the team. Some days have turnouts as high as 15 people, and a group on the social networking website Facebook has over 100 members.

Membership of the team is as easy as showing up. And with no fees, friendly people, and good exercise, it’s no surprise that people have literally joined off the street.

“I was on my way to eat a huge burger at the New Dodge,” says Kemp, “and I saw my friend jog by with the group. When I found out what was going on I joined the next week!”