Toast of the Town … Hippo 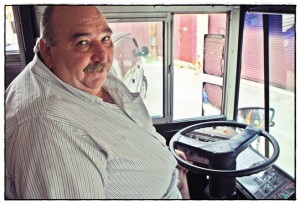 By day he was the school district’s bus driver. By night, he was a bar owner. Sounds like a weird, even forbidden, combination, or at least a character fit for “The Simpsons.”

But in reality John Hypnarowicz managed to balance both roles without any trouble. He’s a big guy with a big heart, too. Hypnarowicz, who goes by the nickname Hippo, retired this past summer, having worked in the school district for 33 years. For many years, he and some friends hosted Christmas parties for special education kids he bussed and will no doubt be greatly missed.

But we’re not talking about that. Hippo also owns “Hippo’s” bar on Conant. It’s got to be about the smallest bar in the metro area, with an official seating capacity – get this – of 30 people. I’ve been to some pretty small bars in New York City, and let me tell you this place is tiny – which is kind of ironic considering the name of the place is “Hippo’s.”

John has owned the bar for two decades now, but, boy, have things changed in town during the past several years. Let’s just say it’s not the hopping joint it once was. Quite frankly, he’d just as soon sell it. Problem is: “Who’s buying?” John says.

It’s a great deal though cause the bar is part of a two-story building with apartments on top.

But we’re not talking about that.

Instead, we’re talking about John and his wife’s brush with fame. This happened several years ago. One day, out of the blue, a Hollywood production company called. John’s son took the call and told his dad to call them back.

John smelled a rat, that he was being set up for a prank.

“Next day, I was being gullible and I called,” John said.

Well, long story short, they wanted to use the name of his bar for a fictitious bar in the movie, “Grosse Pointe Blank,” starring John Cusak and Minnie Driver. You see, John registered that name and has sole use of it. John and his wife, Mary, are generous folks and said sure, go ahead.

They didn’t ask for anything, and they didn’t expect anything. Well, the movie was filmed partly here in Grosse Pointe, but the bar scene was shot in L.A. at a club about the size of a Knights of Columbus hall building.

The bar was a hangout for the characters in the movie.

When the movie was finally released in 1997, John and Mary get an invite to see it at its premiere in L.A. They met a lot of the people who made the movie at a special lunch, including John Cusak, who’s known to be a pretty down-to-earth guy.

And he was, said John.

“He (Cusak) didn’t have his nose in the air or anything,” he said.

John and Mary had a bunch of T-shirts made with “Hippo’s Club” printed on the front and gave them away to the movie folks. Remember neither of them expected anything from the movie. What they got, though, was a trip to Hollywood and a lunch with the stars.

“We weren’t expecting anything just because they used out name,” John said. “They were so generous.”

You can still see a poster of the movie in the bar. Check it out sometime if you’ve never been there. And if you’re thinking of ever buying a bar, this place is ideal.