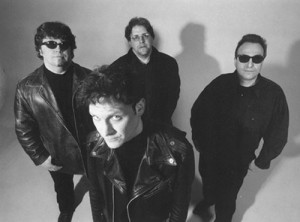 The Cynics, aren't really cyncial at all.

By Charles Sercombe
Once again, the New Dodge Lounge is hosting another throwback to 1980s garage rock land – and then some.

Tonight (Friday, Nov. 4), Pittsburgh natives The Cynics will bring their snarling version of garage rock to Hamtown. The Cynics have not stopped performing all these years, and they still put on a great show.

Frontman Michael Kastelic is a certified wildman, and will not disappoint.

Also on the bill is Detroit’s legendary Rocket 455. This band started up a little after the heyday of Detroit’s garage rock era, but boy they sure carried the rock and roll torch well.

Hard-edged and full of swagger, Rocket 455 still sounds as tough and raunchy as they did back in their day.

Hats off to Toni Callwood for booking some exciting shows at the New Dodge, which it should be mentioned is owned by Cathie Gordon, the rock and roll member of the City Council.

We were wondering if anyone cared that Friendship House won’t be receiving its annual $12,000 from the state to help feed our low-income neighbors. Yeah, chalk up another humanitarian victory for our governor, Rick “I’m a nerd” Snyder, for making this cut in the state budget.

And to think, there are some political pundits out there who keep lecturing us on why it’s a waste of time and effort – and oh, how divisive it is — to try to recall this dipwad.
Snyder cut this money from a number of food pantries because, you know, he’s nerd and doesn’t care if poor people eat or not. Jeez, people, don’t you know? If you’re not rich it’s your own damn fault.

OK, sarcasm aside, this is a serious issue. Fortunately, the good folks at the Polish Sea League have actual compassion for the poor, and are holding a modest little fundraiser on Nov. 12 for Friendship House’s food give-away program.

We recently talked with Andrea Karpinski from the Polish Sea League about the issue, and she wondered if anyone else was going to help out. Consider this a challenge everyone. Let’s make this upcoming holiday season something to really celebrate about.

In the meantime, try to head over to the club, located at Edwin and Brombach, and chip in a $5 donation – and more if you can afford it. DJ Bush – no, not George Bush – will be spinning tunes, and there will be raffles and all sorts of other fun stuff to help raise money.

May the Ghost of Christmas Future haunt Snyder this year.

Before you head over to the Sea League on Nov. 12, first stop by Hamtramck’s most happening – and fun – art gallery, called Public Pool, located on Caniff just east of Gallagher.

That night is the opening of the new exhibit, entitled, “UN-Dress:RE-Dress.”

Steve Hughes, the co-curator of the show, and gallery operator, describes the show as thus:

“Clothing is this common, everyday object that is easy to take for granted,” he said. “But if you step back and think about it, you realize that it plays a far bigger role than just covering our bodies. For this show, we’ve asked artists to consider what clothing does and explore the possibilities of what it can do.”

The modern executive look, or is it?

Hmmmm … Why am I imagining a bunch of naked artists? Kidding.

But seriously, I have a feeling I’ll never think of jeans in the same way again. Don’t know why, either.

Want to get burned?

No I don’t mean ripped off. But I do mean burned in the sense of are you man or woman enough to eat one of the hottest peppers known on the planet?

And not just one, but — within five minutes — try to maw down all of the following peppers: two jalapenos, two habaneras and as many ghost peppers “as humanly possible.”

And when we say eat pepper, it also includes seeds. Now this we gotta see. It’s all happening at Maria’s Comida & Maria’s House Made Salsa at 11411 Jos. Campau on Thursday, Nov. 17, starting at 6 p.m.

Don’t know about “ghost peppers”? They’re one of the world’s hottest peppers, and are grown in a region of India, as well as in Bangladesh. Supposedly it’s 350 times stronger – or hotter – than a jalapeno pepper.

It’s so freakin’ strong that the Indian military considered turning it into a weapon! 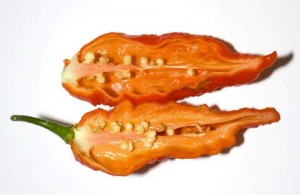 OK, you can count Toast out, cause our hot pepper consumption days are long behind us. But, my god, even in our hottest of pepper eating days, this pepper eating contest is already making our eyes water.

And not surprisingly, contestants are required to sign a “release of liability and disclaimer,” in which you agree not to sue them in case you suffer “bodily injury and/or internal injury.”

Also, according to the rules of the contest, you have to be at least 18 years old (and possibly certifiably insane). The entry fee is $10.

Just in case you cry “uncle,” there will be a glass of milk (what about sneaking a mouthful of peanuts?) on hand in case the burn becomes unbearable, but the bad news is that means you are instantly disqualified (if you’re not already dead).

Note to the good folks at Maria’s: You might want to have an ambulance waiting on hand.