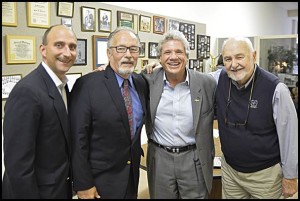 When it comes to good food and great times, Hamtramck has plenty to offer. In this column, we’ll talk about what’s happening at our bars, restaurants and other events throughout the city.
By Charles Sercombe
Last week we were pleasantly surprised to hear from our old friend Nick Frontczak, who has worn many hats in serving Hamtramck over the years.
He has been a long-time attorney practicing here in town, as well as being a former City Attorney for Hamtramck, former Hamtramck City Councilmember and a licensed mortician, who initially followed in his dad’s footsteps in the funeral home business.
We’re pretty sure we missed a few other jobs he filled.
Even during many of his years practicing as a lawyer Nick carried on the family business, serving as Director of Frontczak Funeral Home, formerly located here in Hamtramck at the corner of Brombach and Florian. A dentist’s office now operates at the location (and oh, what an irony: who hasn’t wished being dead rather than go through a root canal?).
Nick’s dad, Stanley, was the subject of his call. 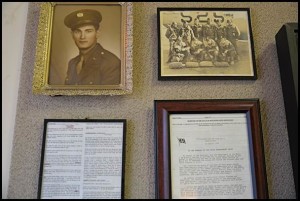 Some of the memorabilia included in a memorial display for Stanley Frontczak.

Nick hosted a gathering Wednesday evening in honor of his dad who died 25 years ago at the too-early age of 70.
But the get-together was much, much more than that. Stanley Frontczak was a member of what is now commonly referred to as “The Greatest Generation.”
Those were the folks who grew up in the depression and then survived the rigors and – for too many – horrors of World War II.
To hear Nick tell his dad’s incredible story, you can’t help but get goose bumps. Stan was truly a self-made man. His life experience included enlisting in the Army Air Force when war broke out in 1941 (well, for America at least) even though he had a legitimate medical condition to sit that war out.
Through grit and determination, Stan became a bombardier for a B-24 “Liberator” and saw action in the Pacific Theater of War.
At Nick’s Jos. Campau office, he unveiled his memorial wall to Stan, which included photos of his dad in the war, family photos and his dad’s Army Air Force uniform, still looking as new as the day it was issued. 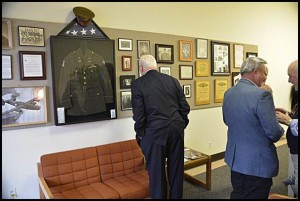 A friend of Nick’s looks at the memorabilia collection.

There aren’t many WWII vets left today – most still living are in their 80s or 90s — but there are volumes of books and movies about this special generation.
Why are they so special?
It’s because they endured a lot of sufferings and hardships to save this world and civilization from forces of pure evil.
And they didn’t complain a bit (well, from what we hear, maybe a little about having to eat spam).
For many vets, no matter what branch of the service they were in, chances were good that you got wounded (or worse). Stan was no exception. He was injured by shrapnel in his back and shoulder.
Nick’s memorial wall was pretty impressive, and to the historian in one, it also told the story of the American-immigrant family. Not surprisingly, Hamtramck Historical Commission Chairman Greg Kowalski was on hand, and was fascinated by the display. By the gleam in his eye, you could tell he was wishing one day to have part of this collection in the city’s historical museum.
Also on hand were Jerry Dettloff, the city’s former Economic Development Director, Buck Jerzy, an organizer of the Polish Sports Hall of Fame, attorney Gerald Kaminski, Hamtramck Judge Paul Paruk and a handful of others that Toast of the Town is not familiar with (sorry folks). 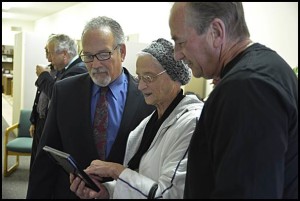 Nick (left) looking over an item with friends.

As one can imagine, Nick said putting the memorial together “was difficult for me to do.”
The emotions of compiling all these memories must have presented a challenge.
At one point, everyone gathered together while Nick talked about the history of his mother and father and their respective parents.
After the war, Stan, like so many veterans, wasted no time getting back to regular life and starting up his career. Stan married and later graduated from Wayne State’s mortuary program in 1949 — at that time it was the largest graduating class – and included several Hamtramck funeral directors.
At one time Hamtramck had about a dozen or so funeral homes, each close to a local Catholic Parish. But times change, and in recent years, Nick said, “they are fading fast.”
Fading fast. That’s something happening in Hamtramck in many aspects – generations, businesses, neighborhoods. But on the other side of that coin, Hamtramck has always been in a state of change and morphing into something new.
It’s up to every generation to make their mark.
Nick’s generation and his dad’s are pretty special, and something to truly toast to.
Thanks, Nick, for a very special evening out on the town.