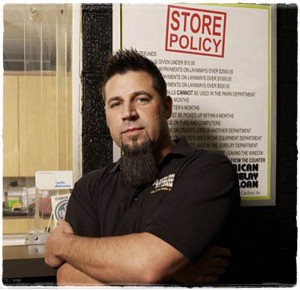 Rich Pyle is one of the undisputed stars of the hit truTV series “Hardcore Pawn,” filmed in Detroit at American Jewelry and Loan on Greenfield Rd., near Eight Mile.

This you may already know, but were you aware that he is also the drummer with SuperLast, a hard rock band currently gaining some, dare we say, national momentum? Certainly, Rich’s celebrity status doesn’t hurt in bringing awareness to his and his bandmates’ music project. And, they’re coming to Hamtramck this weekend (see details at the end of the article)!

We shot him some queries by email, and he obliged us by hustling some well-thought-out answers back in no time flat — which this procrastinating writer dearly appreciated.

Let’s briefly start with what’s currently making you the most well-known, before we jump ahead to questions about the band, and that is, your longtime association with Les Gold and American Jewelry and Loan.

How did you get into the business initially? Did you know Les from somewhere else prior, or did you just apply for a job like anyone else? What are your areas of specialty?

Pyle: I went to high school with the jeweler, Jeff West, who worked at the shop repairing jewelry on the weekends. It seemed like a cool place to work, so I asked him to get me a job after we graduated, and I’ve been there ever since.

Because of my background in music, my area of specialty was obviously musical instruments. With my gift for gab, it turned out that I was a pretty decent salesman, as well.

How has your life changed since the show came on?

What’s it like dealing with the fame? Do you get recognized much on the street? Are you happy with the recognition?

Pyle: Life — both in and outside of work — has changed quite a bit since the success of Hardcore Pawn. On the job, we get people in from all over the world for photographs, autographs and memorabilia, which is quite a change because we never even sold a T-shirt before this whole thing started.

We even get famous sports athletes and Hollywood celebrities who come into American Jewelry to meet us because they are our fans. That in itself is really weird

I do get recognized out on the streets, and it doesn’t bother me at all because I am a people person and enjoy meeting new people.

What’s a typical day like now, at work? I don’t imagine the cameras are rolling the whole time you’re open, every day – are some people disappointed because they come in solely to be on TV – and then, you’re not taping that day?

Do you have to screen out the fame seekers first in the parking lot — you know, the ones who really don’t have anything to sell, but just want to try to get their mugs on the show? Does every other mook in town come in trying to pick a fight?

Pyle: My typical day at work is as it has always been, but now I have a camera in my face recording every single move I make.

We do have people come in that want to experience the “behind the scenes” viewing of the show. We don’t have to deal much with people wanting to visit to just get on TV, as the production crew handles that.

Remember, we are filmed from open to close six days a week, but you are only getting 1 percent of what is filmed and, of course, the most exciting events are the ones that get televised.

It does seem that there are a lot of angry people that come into the store, but that isn’t necessarily the case.

Now — on to your band. I listened quickly to parts of a couple of the tracks your Myspace site links up to. I’m not the biggest fan of pop nu-metal, but I have to say that I love the clean production on the records and I like the fact you’re a bit more melodic in a way that almost recalls some of the 70s hard rock I grew up with.

The site links to “similar bands” like Avenged Sevenfold and Good Charlotte, and then it starts to get weird — I don’t think your sound is too much like either Florence & the Machine or Paramore, but maybe that’s just me.

Who would you list as the bands’ influences, and who were your personal ones, if there’s any difference?

Pyle: My personal influence is Rush. Neil Peart is like a god to me, as probably with most drummers.

As far as the band goes, our influences are pretty diverse. To name a few: The Rolling Stones, The Doors, The Who, Led Zeppelin, and (up through the years) some Chris Cornell, STP (Stone Temple Pilots), Pearl Jam, and Foo Fighters.

Do I remember right, that you were friends first, and then sort of came together for what sounds like was meant to just be some loose jamming initially, but then which grew into something more.? Can you tell that story, very briefly?

Pyle: It actually started off as being a recording project — a few of us had never even met (at that point). When I went to the studio and met Tim Reamer (one of our guitarists and our keyboard player), we realized that we went to the same school, but neither of us knew that the other played an instrument.

The recording went smoothly. The chemistry between the band members was so strong that here we are, three years later, getting ready to release another album.

If the band starts to break big — and it could — how does that impact the day job (I imagine that some, or all, of the other guys could have the same issues)? Does Les let you go on tour for three (or six) months a year every year, or do you just keep it local and let “them” come to you?

Pyle: If the band has opportunities in the future, we will address that as it happens. So, if anyone out there reading this wants to sponsor a tour for us, our ears are open.

Are you working on another record yet? Anything you can say about it?

Pyle: Yes, we are currently in the studio. The new album is a little edgier, more personal, and it’s a better reflection of each of us.

It’s also allowing us to showcase each individual on one track or another. With our first album, we were brought in by the late Tim Barnes to play our parts in the studio, with limited creative input.

The tracks we are laying down now are 100 percent ours. We’ve given the new songs a test drive with our audience before recording them this time, and have had a lot of positive feedback.

How many times, roughly, have you guys played live together now as an official “band”? Have you played Hamtramck before? Or, where else around town have you gigged?

Pyle: As an official band, we’ve played out several dozen times. We’ve played DTE, opening for Def Leppard and Heart after winning the Detroit Fox Rocks competition, where we won by fan vote, beating out 70 other local bands. (Hey! I saw you at that show! — Ed.)

That is a huge honor, because there is so much great talent in Detroit. We’ve played The Machine Shop, The Crofoot, The Pike Room, Hardrock Café, The Blind Pig, The Token, Blondies, Planet Rock in Battle Creek, New Way Bar, All Around Bar, Rack ‘N Roll, U Detroit Café, Simon’s After Dark, Trenton Street Fair, etc.

Last spring, we traveled to New Hampshire to perform at Laconia Bike Week with Jackyl. This was by special invitation from Jesse Dupree of Jackyl and Full Throttle Saloon, which is also a truTV reality show.

We’ve also performed with Great White, Robert Bradley, and Gary Hoey to name a few others.

Did any of your, or the band’s, equipment come from American Jewelry and Loan? From some poor schmoe who couldn’t afford to come back and get it in time, or from people who just sold the stuff outright because they needed cash fast?

Pyle: I have not bought any cymbals from a music store other than American Jewelry in the past 20 years. It would be stupid for me to go anywhere else because it is so much cheaper at the pawn shop. A lot of musicians get their equipment from us.

If there’s anything else I didn’t address, feel free: Take your shot! Thanks for your time, and good luck at the gig!

SuperLast, featuring Rich Pyle from the show Hardcore Pawn on drums, headlines a gig this Saturday night, Jan. 28 at the New Dodge Lounge, along with Bison Machine and Citizen Zero on the bill. The New Dodge Lounge is located at 8850 Jos. Campau, a couple blocks south of Holbrook on the east side of the street, across from the Checkers burger joint. Show starts at 8 p.m. $5 cover.