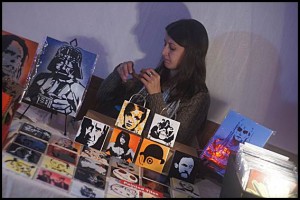 Mark your calendars, Hamtramck — you now have something to do the second Tuesday of every month.

Beginning in November and continuing indefinitely, BS Art Promotions is hosting a monthly art and music night at Skipper’s Hamtown Bar. If you’re looking for an inexpensive and entertaining night out then this is for you — admission is free and drinks are cheap.

Better yet, because each month focuses on a different theme you won’t get stuck seeing the same art by the same artists show after show.  The series kicked off Nov. 13 with the “Low Dough Art Show,” featuring all art for under $50.

On display at the Low Dough show was work by Phil Mason, Kill Monkies, Steve Gamburd and Rob-O, as well as event hosts Beth Amber and Jerry Shirts.  Attendees could also purchased tickets for an art raffle, which at just $2 each both paid for the event and allowed for some incredible steals for the winners.

The musical portion of the night featured performances by Bright Echo and Bastion, with intermissions covered by DJ Tim Pop. For the third-beer hunger pangs, as she does each week bartender Joanna Komajda-Smith served up a mean Cincinnati-style Coney Dog for just $2.

Coming up next for BS Art Promotions is “Land of Misfits” on Tuesday, Dec. 11. Billed as “An Alternative Christmas Art and Craft Show,” featured artists include Carly Szajnecki, Natasha Nicole Mark, Twisted Willow, HAND Group Studio, Carl Lundgren and hosts Beth Amber and Jerry Shirts. The show starts at 8 p.m. and will be accompanied by the musical stylings of DJ M3.

“We just wanted to bring art and music back to Hamtramck,” said Beth Amber.