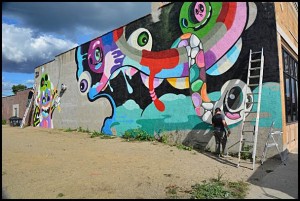 New Dodge Lounge now has a colorful abstract mural on the side of its building, thanks to a graffiti artist who goes by the moniker “Patch Whiskey.”

If you see snakes on the side of New Dodge Lounge don’t worry.

No you haven’t been drinking too much.

It’s a mural that bar owner Cathie Gordon commissioned, and it’s also a sign that Hamtramck is becoming a Mecca for muralists.

Add the New Dodge Lounge to the growing list of buildings and structures that are sporting sanctioned graffiti art. A year ago the Montana Paint Co. sponsored a mural fest of sorts in town in which internationally-known artists travelled to the metro area to do their art.

Hamtramck is home to several of the murals created.

Gordon hired an artist who goes by the name of “Patch Whiskey” to spray paint the side of her building. That was a month or so ago, and you can see the finished product now. 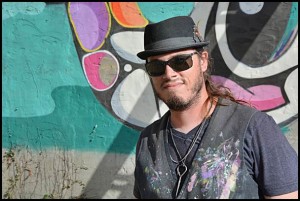 “I always wanted to do something with that wall,” she said, referring to what had been a drab grey side.

The Review caught up with the Charleston, South Carolina-based muralist when he had just begun to create his mural.

“I just paint monsters for a living,” he said.

When you see the finished product there are indeed a number of squiggly creatures throughout the artwork.

He calls the critter that keeps reoccurring in his work as “Winkel.” The character takes different shapes in his murals, but in this case he said “it’s coming out more snake-like.”

Gordon says the mural is a treat for the eyes.

“Every day I drive up and see something different,” she said. “It’s energizing.”