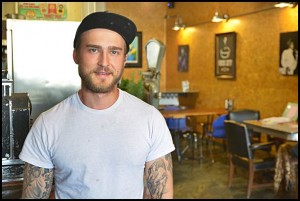 At the space formerly occupied by Maria’s Comida restaurant, at 11411 Jos. Campau, a new dawn has brought a fantastic new selection of flavors to town.

Rock City Eatery owner Nikita Santches has been baking pies and serving them up at Ferndale’s Rust Belt Market, as well as other trendy around-town hot spots for years. Anyone who has tasted a slice of the killer flavor combinations that Santches has fused together under one pie crust, knows that this guy can bake.

Not only can Santches bake, he can cook a pretty mean meal, too.  Imagine all these flavor popping combinations in a sandwich:  Lamb cheeseburger with charred onion, zataar labneh, harissa, bacon and poached egg.

How about roasted trout with cucumber, pickled red onion, tomatoe, dill, labneh and roasted capers?  Not rich enough for you? Add foie gras for a few bucks more.

Santches’ current menu includes a revolving selection of sandwiches, pies, and appetizers, which he plans on changing every week or two.

Santches has also given free reign to his creative side when preparing his impressive drink menu:  His craft cocktail “Death in the Afternoon” features champagne and absinthe.

His “Lushies” are basically slushies made with Faygo Black Cherry and whiskey. 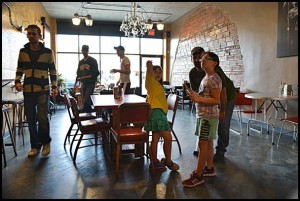 Non-alcohol drinks include horchata, a traditional folk grain and rice-based sweetened drink that will be your new ‘thing’ once you taste it.  Morir Sonando is a drink you wished you had grown up on — basically a sweetened citrus milk combo that tastes like a dreamsicle.

Perhaps Santches’ own upbringing has something to do with his unexpected juxtaposition of flavors.  Son of a Russian mother and a Spanish father, Santches grew up in Moscow.  At age 12, his family moved to Michigan and started working in kitchens and the construction trade.

Both the cooking skills that Santches learned during his teen years while working in commercial kitchens with his mother, as well as the construction skills he more recently developed under the tutelage of his father, have gone into making the Rock City Eatery a place that reflects his multi-ethnic character.

Santches and his father, described by Santches as a “construction perfectionist.” spent months laboring over the remodeling of the interior, ultimately creating a decor that is decidedly Detroit rustic.

Partially exposed brick walls (chiseled away by Santches himself) and stained plywood floors (designed by Santches’ father), are part of the aesthetic that Santches was going for, and fit in the budget.

Local artist David Moroz constructed much of the industrial chic seating. A colossal chandelier adds just the right amount of glittery glam, catching and reflecting the light from a series of DIY lighting fixtures crafted by Santches’ father.  The piece de resistance is a set of massive metal bomb shelter doors, dragged up from the basement, that Santches and his father lovingly sandblasted and then mounted to the wall.

Original artwork by musician and artist Niagara adorns the back wall.  Local photographer and CCS instructor Kay Young provided large-scale original photographs of Patti Smith, Iggy Pop and Aretha Franklin, which keeps in step with the local rock city theme and add an eye-popping punch to the walls.

Final note: When asked how he landed in Hamtramck, Santches gives the obvious answer: “Jason Freidmann wooed me here.” Freidmann had been Hamtramck’s Director of Community & Economic Development until a few weeks ago.