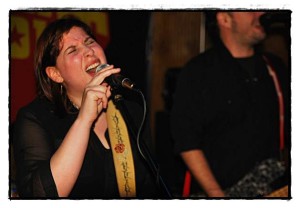 The Whiskey Charmers charmed the Blowout crowd on Thursday night.

When it comes to good food and great times, Hamtramck has plenty to offer. In this column, we’ll talk about what’s happening at our bars, restaurants and other events throughout the city.

By Charles Sercombe
This is going to be one busy city this weekend.
It’s guaranteed that by the end of Sunday you’ll collapse from exhaustion and from having too much fun.
Let’s start with the too much fun part. This weekend is the 17th annual Metro Times Blowout, sometimes referred to as The Hamtramck Blowout.
Well, times have changed and for the second year in a row the Blowout has expanded outside the confines of Hamtramck, so it’s not nearly as Hamtramck exclusive as it used to be.
And for some, that means the charm has worn off. No matter, there are 10 local bars participating this year, including: Small’s, Paycheck’s, New Dodge, Painted Lady, Celina’s, Kelly’s Bar, Whiskey in  the Jar, Seven Brothers, Capo Lounge and Mars Bar.
The music festival kicked off on Wednesday in Detroit and costs $25 to attend the entire weekend. If one of these bars is your favorite hangout, sorry, you still have to pay $25.
The Blowout also plays in several bars in Detroit and Ferndale. This year the festival expanded to more than a handful of bars in Detroit.
Highlights for Friday and Saturday include Hamtramck’s favorite pub rockers The Hentchman at Paycheck’s on Friday (12:45 p.m.) and one of the coolest named bands, Mexican Knives at New Dodge (10:15 p.m.).
On Saturday, another Hamtramck favorite is Ricky Rat (with his Pack Rats) playing at Small’s (12:45 p.m.) and the legendary funk-rockers Howling Diablos appearing at the New Dodge (12:45 p.m.)
Toast of the Town will probably skip the festival this year, but suggests the best way to experience it is to travel from bar to bar without any plans and you’ll likely hear a bunch of good bands.
If you have any energy left over, be sure to stop by St. Florian’s annual Strawberry Festival on Saturday and Sunday. Come hungry, too, because the parish has one of the best Polish kitchens around, dishing up all the favorites, such as stuffed cabbage, kielbasa, potato pancakes, pierogi and on and on.
Some of the attractions include a Sunday performance (1-4 p.m.) of the best area Polish dance ensembles, an all class reunion on Saturday and everyone’s favorite party band, The Polish Muslims also on Saturday (6-10 p.m.).
We’ve just scratched the surface here.
For those who like to balance their fun with a dose of health, Hamtramck has the perfect prescription for you. On Saturday, it’s the annual Health Hike, starting at 9:30 a.m. at Keyworth Stadium.
It’s a great way to kick off an exercise program now that warm weather has arrived (well, we hope so). The event is free, and after registration the group will begin a three-mile walk throughout town.
After the tour of the town, stick around. Although it’s not going be a formal affair like it was last year, you can watch a flag raising on Jos. Campau’s 18 flagpoles.
Hosted by the city’s Human Relations Commission, each flag represents one of Hamtramck’s many ethnic communities. When they are all up it’s really a breathtaking sight to see. 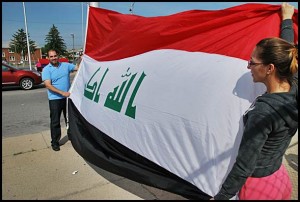 On Saturday at 4 p.m. the Hamtramck Human Relations Commission will raise the international flags representing the many ethnic communities who live in Hamtramck.

Commission members and volunteers will gather outside Maine Street Restaurant at 4 p.m. and begin hoisting the flags.
Did we miss anything?
If we did, we apologize, but no matter stick around town this weekend because it’s going to be one to remember.