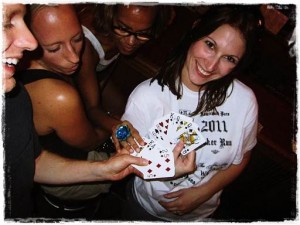 Well, for starters, when it loses to several other better full houses – and a few suspicious four-of-a-kinds, too – at the third annual Hamtramck Poker Run this past Saturday afternoon.

Also, when you paradoxically get one in a half-empty bar.

Still, it was fun reconnecting with some bars that, frankly, I have been away from for far too long.

As I mentioned in this same column last week, the motivation behind this movable booze feast changes from year to year. This year, the idea is to use the profits to begin saving toward an Amsterdam-style “beer bike,” a sort-of Dutch party on wheels that will surely be a head-turner around this town, when it manages to happen. And, which will add a nice touch of good old fashioned Euro spirit, as well.

The drawback is, these bikes are almost unbelievably expensive. Think five figures.

And I don’t think this Poker Run went too far toward solving the purchase.

Still, for the 60-some-odd persons who did come out to play — most of them young and sweaty from either biking or walking between venues — it was a unique and fun concept.

To refresh: One began at the Polish Sea League, arriving after 1 p.m. to sign up, buy a drink (cranberry vodka with cranberry juice, in my case), and then get a playing card, marked with their bar’s name somewhere on the back. I got: the Jack of Spades. 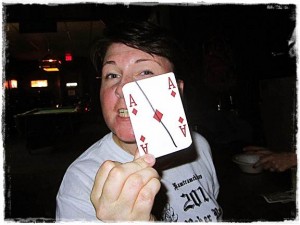 Nothing up her sleeve.

I’d never been inside the Sea League before. As with all the bars, the bartenders and patrons were friendly, beyond the fact that some of them may have taken a little “head start” in the liquid refreshment department.

From there it was off to Small’s, a bar I have always liked. I was already on to a cola. As a bonus, they served $1 hot dogs (and corn dogs, for the rogues in the crowd) to help soak up the, ah, excess. My reward for this stop: the Two of Diamonds (remember that – it will be a recurring theme).

Stop Number Three: South on Conant a scant few blocks, to Skipper’s. No sign of Barbie or Ken, but it was a pleasure to see Hell’s Belle Joanna Komajda manning, or rather wo-manning, the bar. My libation: Orange juice, on the rocks, please. My card: the bloody Two of Diamonds – again! (They’re all using their own separate decks, you see, so this exact repetition of cards is indeed possible.)

Stop Number Four: Off to the optional stop for an extra card, and a shot of Ouzo, at the 2 Way Inn. Located somewhat outside the city limits into Detroit, on the southwest corner of Mt. Elliott (east of Mound by a few streets, at this point) and Nevada, aka McNichols-and-a-half. Another bonus: Broasted chicken! 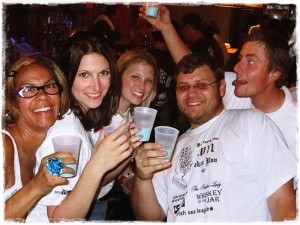 Konrad, something wet is about to happen to you.

The 2 Way Inn, apparently the longest continually serving bar in the state, has a security system that, once you are buzzed in, makes you feel like you’ve made it into some secret club, “behind the green door,” as it were.
This stop was an option, just for those who wanted to add a potential replacement card to their hand. Mine: The Nine of, yes, Diamonds. Hmm.

Stop Number Five was the venerable Whiskey in the Jar, owned by City Councilmember Tom Jankowski but run by a petite woman with dark hair who has excellent taste for stocking the beer cooler. Mental note made, to try the Irish Black Lager, straight from some bar in New York that supposedly only sells their own beer, “light or dark.”

Seeing the same folks, traipsing in after me. My beverage: Another cola – which I barely touched. My card: Now what’s going on here?! THE TWO OF DIAMONDS?! Who will believe it? I mean, okay, it is three twos, but geez…

Finally – the last stop, where we all meet up to claim our rightful (or left-ful, or just-plain-underhanded) prizes: The Painted Lady, formerly Lili’s Club 21.

Been a while since I’ve been in here, too – used to dread the smokiness that seemed to always build up like a bad fogbank. Always liked the place otherwise, though. Seems weird not to go down the alley and enter from the side anymore – now, it’s straight in the front door, and set yourself down. Condiment packages are flying around, and it’s the bartender as chief instigator.

My drink: A tall rum and OJ, I think, and then later a shot of that Polish blackberry brandy that I can’t even recall how to pronounce, let alone spell. 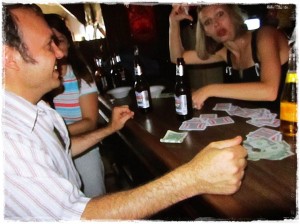 My card: a Jack of, blow me down, Diamonds, giving me both a bad full house (three Twos, all of Diamonds, no less, over Jacks), and, on a lesser note, also a Flush.

But there’s good natured and drunken chicanery afoot, and after awhile, I almost wasn’t above it myself. Nearly traded with a drunken lass for her other two Twos, which would have given me a most suspicious five of a kind, but I just couldn’t do it. It helped to remember that the cards were marked, and I would’ve ended up with more than one from the same bar, which – I imagined – was a DQ, straight away.

But there were other scoundrels about, working their scoundrelry without remorse. While forgetting to wear their shirts. Why don’t the girls forget THEIR shirts? I digress.

In the end, I was about eighth or so, barely missing out on the last good prize (a $20 gift certificate to Small’s), and winding up with (you may guess it) T-shirts. Two of ‘em, in fact. Yayyy.

And that weird hand of cards. But it’s okay. I’ll get ‘em next year. 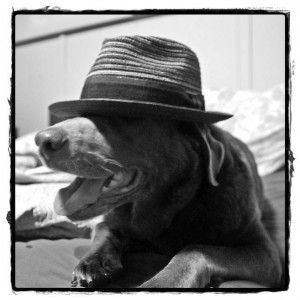 The day after the Hamtramck Poker Run. Hair of the dog.