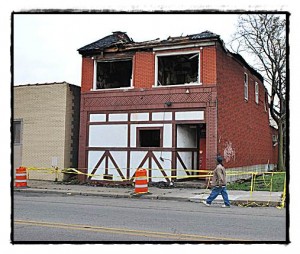 The former Hamtramck Pub on Caniff burned down last weekend. It was once host to Detroit’s garage rock scene in the mid-1980s.

Usually in this column we celebrate things that are alive and fun.

Today, though, we are going to raise our glass to an old haunt that was once one-third of what I like to call Hamtramck’s triangle of rock.

The former Hamtramck Pub, at 2048 Caniff, burned down Saturday night. And when we say burned down, we mean totally gutted with just part of the sides and the front remaining standing.

From what we have heard the city needs to do an emergency demolition of what remains because it may fall down at any moment.

Man, so many memories here. The Pub was right at Hamtramck’s entrance there on Caniff, close to the freeway. Inside, Rod and Cole – and their buddy Paul – opened their doors to Detroit’s rock and roll community.

Probably a couple of generations of rockers graced their tiny stage. In the mid-1980s, Hamtramck was home to Detroit’s garage rock movement.

I was part of that, having played drums in the Hysteric Narcotics. 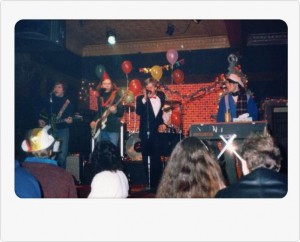 At that time, it seemed that the only places to play in the Detroit area were the Pub, Paycheck’s down the street and Lili’s.

The Hysteric Narcotics were gig whores. We’d play anywhere, anytime, and it seemed like we played Hamtramck almost every weekend. We made the circle, from the Pub to Paycheck’s to Lili’s.

And then repeated it all.

Rod and Cole ran a modest establishment. Their bar had the cheapest little PA, but they were generous hosts – in spite of being maybe a little prickly sometimes.

The most memorable night for me was one where I wasn’t even there. How’s that?

A good friend of mine, Rick Metcalf, was there one Saturday night when the Vertical Pillows were playing. After the show, he got into his car, parked across the street from the hall next door, and all of a sudden felt a sudden flash of hot pain in his left leg.

Unbelievably, a stray bullet fired by a crazed nut from the hall pierced through the car door and into his leg.

Poor Rick spent I don’t know how many months in a hospital bed at Detroit Receiving – one of the worst emergency rooms and hospitals to find yourself in.

He now has a metal rod holding his leg together.

In situations like this people often joke about things to soften the blow. I think it was Rod – or maybe Rick? – who came up with the joke about being able to get a “shot and a beer” at the Pub.

I also remember Rick recounting his Hamtramck police experience once the cops came. For some reason – maybe panic? – he pulled his car into the gas station down at the corner and waited for police and an ambulance to arrive.

A couple of detectives arrived, who are now long retired and will remain nameless. One of the detectives, Rick said, reeked of beer and slurred his words.

The Hamtramck Pub is now gone for good.

I was hoping someone would buy it and do something with it.

Rod and Cole are deceased. And I just learned this week that their pal, Paul, who used to tend bar, died just two months ago, I’ve been told, from a stroke. He had fallen on hard times and spent most of the day walking the streets.

Listen up, all of you young dudes, Ian Hunter was right when he warned that rock and roll can be cruel.

I asked the city what was the status of the Pub’s ownership, which also featured apartments upstairs. It appeared that the building had been vacant for a few years.

According to city records, the structure came into the ownership of the city last February. Jason Friedmann, the Director of Community & Economic Development, said the city bought it for back taxes owed to the county. The thought was to rehab the building, but once inspectors got inside, a basement full of water was discovered.

It was decided then to demolish it.

So, in the long run, the Pub was going to come to its final end one way or another.

Fortunately, we still have Paycheck’s – but it’s just hanging on. Lili’s was sold and is still one of the best rock and roll joints around. It’s now called The Painted Lady.

Do yourself a favor and stop by one or both bars in the coming weeks. And, of course, raise a toast to Rod, Cole and Paul. 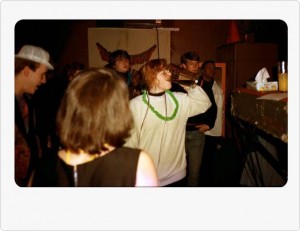 In the Good News Department, last Saturday’s citywide arts festival was nothing short of a huge success, according to our pal and occasional Review correspondent Walter Wasacz.

From what he could estimate, there were several hundred visitors to the city. We’ve included a few photos he took of the event.

Sometimes in Hamtramck, it’s two feet forward and then one step back. Saturday was definitely two huge strides forward for Hamtramck. 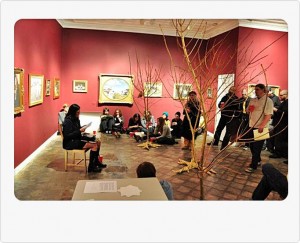 Hamtramck was buzzing with visitors last Saturday during an all-day arts festival scattered around several venues and houses.

19 Responses to Toast of the town … Goodbye Hamtramck Pub