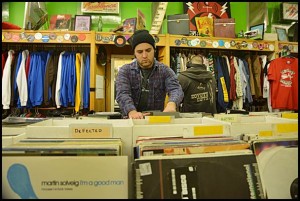 Hamtramck is increasingly becoming a destination spot for young adults, thanks to shops like Detroit Threads.

When it comes to good food and great times, Hamtramck has plenty to offer. In this column, we’ll talk about what’s happening at our bars, restaurants and other events throughout the city.
By Charles Sercombe
Hamtramck, you’re exciting.
But you know that.
And now even more people know this, thanks to the folks over at Movoto Real Estate, which runs a blog that highlights a series of “Top 10” communities in a gazillion different categories, such as:
“10 safest small towns”
“10 happiest small places in America”
“10 snobbiest cities in America”
“10 most caring cities”
The list goes on, including: “10 most exciting places in Michigan.”
That’s where Hamtramck comes in at number 6, right after Ann Arbor (which by our estimates would also make the “snobbiest” list), East Lansing, Grand Rapids, Royal Oak and Marquette.
Following Hamtramck are Kalamazoo, Wyandotte, Birmingham and everyone’s favorite city these days, Detroit.
So how does one base the ranking? Movoto looked at several aspects, including the number of entertainment venues (bars, clubs, and restaurants), the number of young people and the number of outdoor activities.
The company also looked at photos and videos of the cities. Movoto had this to say about Hamtramck:
“ … This city knocked a lot of bigger places back on their heels in the stats department. Though it was little, this city ranked first in population density, nightlife per capita, and music venues per capita.
“It’s also worth mentioning that this place is incredibly diverse, and a melting pot of cultures tends to be pretty exciting just by the variety it brings. That variety includes Polish festivals, culture festivals, and much more.”
Hamtramck is no stranger to the limelight. In 1997, The Utne Reader named Hamtramck one of the 15 “hippest” neighborhoods in America and – get this – Canada.
Given all that, we asked Mikel Smith, the owner of Detroit Threads, located in the heart of Hamtramck’s business district on Jos. Campau, if he thinks Hamtramck deserves those accolades.
Smith, who not only deals in clothing but also has one of the best vinyl record selections in the metro area, which places him high in the hip category, said yes and “more so.”
“I’ve been here 17 years and there have been ups and downs with stores coming and going, and now it seems like it’s rising,” he said.
And by stores he means businesses that attract young adults and those seeking a unique urban experience. The new influx of young people is largely due to increasing rents in Midtown, once ground zero for Detroit’s bohemia.
“They’re discovering Hamtramck’s more affordable and there’s more to do,” Smith said.