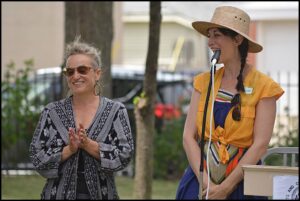 By Charles Sercombe
Poetry was in the air Saturday afternoon.
The first cultural event in a series called “Our City Series” kicked off in the rose garden area of Immaculate Conception Church, and was sponsored by the Hamtramck Arts and Cultural Commission.
About 50 people came out on a blistering hot day, but they were able to sit under a tent and in a largely shaded yard. It wasn’t bad at all, as long as you stayed out of direct sunshine.
Plus, there were plenty of fresh beverages to keep you hydrated.
Several readers presented poetry and other writings. They represented the ethnic make-up of the city: Yemeni, Bangladeshi, Polish, Ukrainian and more.
The first reader was Hamtramck’s own Mayor Ameer Ghalib. The mayor, a practicing nurse by trade, is a poetry writer himself, but he chose to read a poem by fellow Yemeni poet Dr. Abdulaziz Almakaleh. 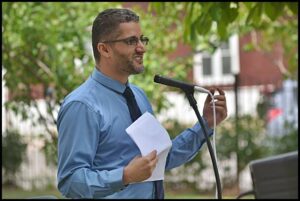 Ghalib read the poem in both Yemeni and English. It was titled “Sanaa,” a tribute to Yemen’s largest city that the poet was forced to leave because of political unrest.
The theme of oppression was a thread through a few of the writings offered for the day – something many immigrants in Hamtramck can relate to.
Another set of verses called “Poems from the Gulag” was read by Myroslava Stefaniuk.
Later that night, Cathie Gordon hosted her bar’s last night blowout. Toast of the Town couldn’t attend, but from the photos we saw posted on Facebook, it looked like a ton of fun.
One post from former Hamtramck police officer Dennis Whittie caught our attention. He recounted his first introduction to Cathie while he was on patrol.
We won’t get into the bawdy greeting he had with Cathy at the bar, but it’s safe to talk about his request for something to quench his thirst.
Cathie handed him a soda, but in one sip Dennis realized it was so much more than plain old soda. Being on duty, he found a way to discreetly pour it out in the bathroom. 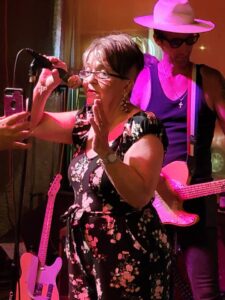 That’s pure Cathie – always making her guests feel at home. Dennis, by the way, is now an attorney with an office in Ferndale.
Here’s to a happy retirement for Cathie and her hubby Lew.
When it comes to good food and great times, Hamtramck has plenty to offer. In this column, we’ll talk about what’s happening at our bars, restaurants and other events throughout the city
Posted July 1, 2022