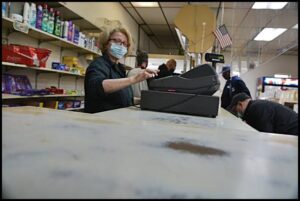 Gina Sinadinovski and her family will soon shut down their business, American-European Market, next Monday. The family has been operating their market since 1975.

When it comes to good food and great times, Hamtramck has plenty to offer. In this column, we’ll talk about what’s happening at our bars, restaurants and at other events throughout the city.

By Charles Sercombe
COVID-19 certainly isn’t over.
Once again, indoor bar and restaurant service has been suspended – at least until Dec. 8.
The virus outbreak has been surging for the past several weeks, which has prompted Gov. Whitmer to clamp down on person-to-person contact.
This time around, though, there is no federal financial help to ease businesses through this.
The profit margin for many businesses locally is razor thin at best.
Just a few weeks ago, we were touting the re-opening of Café 1923, where co-owner Shannon Lowell spent the months prior during the state shut down to renovate his cozy coffee house on Holbrook Ave.
He scrubbed, and painted, and redid his floors, and so much more.
Back in October, he was optimistic that the worst was over.
Ah, but COVID had another insidious plan, and now he has to stop inside service – although carryouts will be available. 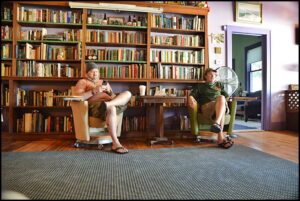 Just as business was returning at Café 1923, the news came down that there is a three-week ban on indoor dining.

As you might guess, he’s not happy. Although he supports the governor, this closure could mean the end of his business, or at least mean having to stick his neck out for loans.
His anger is for those who didn’t obey the governor’s health directives to take precautions – like wear a simple mask while out in public.
“I’ve done everything I had to do,” Lowell said. “But now I’m paying for the guy down the street who didn’t.”
He didn’t want to say this, but here’s the term he hasn’t wanted to utter: “It’s a death knell.”
The governor, he said “is making the grownup decision, but I’m sad she has to do it.”
So, last week, he invited some folks over before the closing, and gave away some of his food and other perishable products. It was a couple of weeks’ worth of goods.
If this continues, Lowell wonders what businesses will survive.
“There’s nothing left,” he said. “All the business people are stunned, like zombies.”

Retiring …
A Hamtramck landmark business is shutting down, but it’s not because of COVID. That may be considered good news, for these times.
The Sinadinovski family, who own and operate American-European Market, located on Jos. Campau Ave, near Commor St., is calling it quits after 45 years in business.
Yes, dial the wayback machine to 1975, and that’s when the market first opened. The Macedonian family business specialized in European cheeses, smoked meats, breads and everyone’s two favorites: spinach pie and burek.
Those two items were just about everyone’s favorites, and if you were lucky to get there when they came fresh out of the oven, and also add slices of fresh tomato to go with … your day just got better.
“Gina” has been at the center of the business, and had help from her husband, “Semo,” and two sons, Michael and Steve.
Amazingly, Gina has barely aged in all these years.
For decades, their family business has been a front-and-center witness to history passing by out on the street. There were rallies by presidents and presidential candidates, Pope John Paul II rode by in his “Popemobile” down the street, and then there were all of the Hamtramck Labor Day Festivals.
So why the departure?
Changing demographics. The store’s European clientele moved to the suburbs over the years, and then they eventually stopped coming down to Hamtramck.
Business dwindled. Times are-a-changing.
The family sold the building recently, and next Monday will be their very last day open. There’s not much left on the shelves.
“I’m very sad,” Gina said. “But you gotta go. I’ll miss Hamtramck.”
Yeah, but what about those spinach pies and burek? How about some recipes?
Forget it. There are no recipes.
“It’s got to be by hand, the touch of the dough,” said Gina, who’s been making them all these years.
While Gina and her husband can retire, if they want to, their sons will move on in life. Steve has a job with Chrysler.
Michael will take a month off to relax on the couch, and then look for something.
The rest of us? We’ll be looking for our fix for spinach pie and burek.
Hmmmm, maybe we should try our own luck with a traditional recipe and see if our hands can work some magic at home?
Posted Nov. 27, 2020