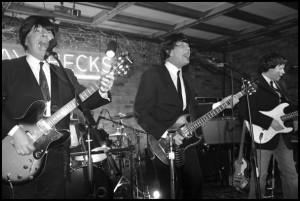 It was 50 years ago today, OK a few weeks ago, that The Beatles made American TV history.

For a moment there, it felt like 1964 all over again when Beatlemania ruled the radio airwaves.

Sunday, Feb. 9, marked the 50th anniversary of the Beatles’ debut on the Ed Sullivan show. It was one of the most watched television events.

Even before the Beatles arrived in America the English “mop tops” — as they were known — were already big time here, selling millions of records. 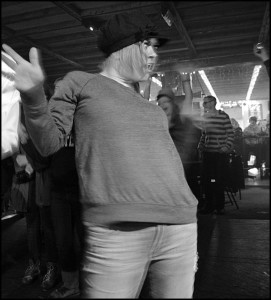 For those of a certain age, it was fun to reminisce last Sunday at Paycheck’s Lounge and watch The Polish Muslims don Beatle wigs and play all of the tunes The Beatles performed on Ed Sullivan.

It was a surprise to see the bar packed, and on entering we joked with “Paycheck” himself .

Wow, that was a double-whammy of nostalgia, 1964 and Hamtramck in the early 80s.

Back in the 1980s, Paycheck’s was one of three Hamtramck bars that were the epicenter of the punk and garage rock movements.

The crowds are long gone from Paycheck’s, but he manages to keep afloat. Hey young rockers, need a place to play? Check out Paycheck’s next time you’re looking for a gig.