Toast of the Town … Block party is an inspiration for more, please 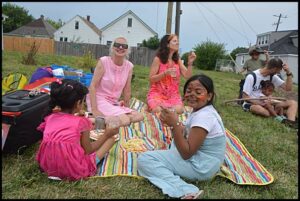 The city’s block party last Saturday was a huge success, hosted by the city’s Arts and Cultural Commission.

By Charles Sercombe
Once again, the Arts and Culture Commission came up with another winner for Hamtramck.
Last Saturday’s Block Party was a great success, despite a later threat of rain.
The party was held at a sort of homemade park area at St. Aubin and Carpenter. It was geared toward both kids and adults, and featured plenty of grilled food, along with potluck dishes brought by participants.
Kids had plenty of games to play, and of course took part in face painting because, well, that’s a huge kid thing.
Toast was suffering from a bad allergy day – curse you ragweed! – and could only stay for just a little bit.
The chicken and hot dogs looked so good and tempting, as did the side dishes! Long live the BBQ master.
Hamtramck firefighters stopped by with their trucks, and kids and adults got to gawk at the trucks and ask all sorts of questions. Sorry, though, no rides could be given.
It all made one wonder — well, to Toast at least — why can’t the city have more of these homegrown events? 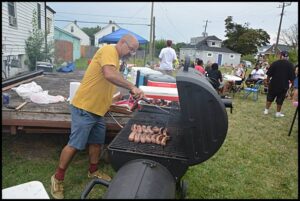 Well, to answer that, this event was part of the ongoing “Our City Series,” that just a little while ago also sponsored an outdoor poetry reading event on the grounds of the lovely Immaculate Conception Church garden.
This church has long served Hamtramck’s Ukrainian community, which has over the years largely moved out into the greater metro community – although many still call Hamtramck home, in one way or another.
The area of the block party, namely St. Aubin and Carpenter, was once considered a crime-infested area. It didn’t help that across the street on Carpenter is one of the worst neighborhoods of Detroit.
We say that with a heavy heart because living in poverty is obviously cruel.
The point is, there have been some interesting developments on both of the Hamtramck and Detroit sides of the Carpenter St. border.
We’re thinking of Popps Packing, Record Graveyard and Trixie’s bar on the Hamtramck side. These proprietors have done the community a huge service in making Hamtramck a better place to live.
Let’s keep spreading the love.
When it comes to good food and great times, Hamtramck has plenty to offer. In this column, we’ll talk about what’s happening at our bars, restaurants, and at other events throughout the city.
Posted Aug. 26, 2022