Toast of the Town … Check out the newly revamped Polonia Restaurant 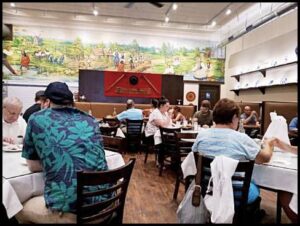 Last week Polonia Restaurant held its grand re-opening. The restaurant is under new ownership and underwent a major renovation.

By Alan Madlane
Well, fellow foodies, let’s explore the newly reopened Polonia, shall we?
Full disclosure: The owner of this newspaper, John Ulaj, also owns Polonia now.
Fuller disclosure: I already “explored” the restaurant this past Friday, with a friend in tow.
The Verdict: Come and get it!
If you’ve been to Polonia before, the first thing you’ll certainly realize is that the place has been given a long-due facelift.
Gone are the tightly wedged-in old wooden booths, in favor of a much more open and contemporary arrangement.
Also obvious will be the new sit-down bar, just to your right as you enter, poised and waiting to get you started on your gustatory journey with a cocktail, beer or a “kiss” – as in, a shot of one of the flavored liqueurs that are still a specialty.
Seated at one of the center tables, surrounded by comfortably spaced other diners, we decided on an appetizer of zapiekanki.
You might rather call it a “swank-ah-frank-ah,” because that’s what it tastes like with the optional sausage added – think meat, cheese, bread, ‘shrooms, onions (not listed as an ingredient, but there nevertheless) with ketchup.
Called “a popular street food in Poland since the 1970s” on Wikipedia, but also “a slightly forgotten fast food, reminiscent of the last breaths of communism” (!!) elsewhere, we say, “give it a try!”
Moving on, I selected the senior dinner combo with pork loin as my main dish (there are numerous main choices), which came with a starter course of either soup (I had the fabulous chicken noodle), or a dinner salad, or coleslaw, or beet salad, or cucumber salad, plus a bread basket with nice moist rye, plus pop or coffee, plus a single dessert crepe, all for one low price that is, believe me, a bargain — especially for an evening meal.
My companion availed herself of the potato pancakes, and pronounced them “excellent.”
While we dined, a line began to form. Unlike before, there’s a bit wider aisle now to accommodate such.
When we were sated, there was plenty still to take home with us, as well.
Now, it’s your turn.

When it comes to good food and great times, Hamtramck has plenty to offer. In this column, we’ll talk about what’s happening at our bars, restaurants, and at other events throughout the city.
Posted Sept. 24, 2021