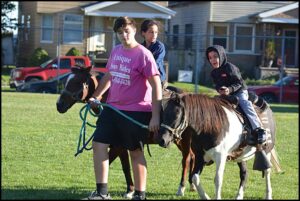 Pony rides were popular at the recreation department of the school district’s Fall Festival.

By Charles Sercombe
Last weekend was one of those picture-perfect fall days.
It was sunny with warmish temperatures, clear blue skies and a hint of a chill to come.
It was the perfect backdrop for two events, both family-friendly, as the saying goes.
First up: On Friday late afternoon, the Hamtramck School District’s Recreational Department hosted a Fall Festival. This was a chance for city kids to get in touch with country life: pony rides, hands-on petting of chickens, rabbits, and goats; pumpkin sale, donuts, crafts and even wall climbing – all at the school district’s Pulaski Park.
As you would expect, the country-life starved kids went right toward the animals. Toast knows ponies from way back, and these are the easiest-going of horses out there (although nothing against full-sized horses, which are pretty majestic creatures).
Now, over to Sunday, and the weather is still sunny and warm, but with a bit of a stiff wind putting a chill in the air.
Toast was at Hamtramck’s very own historic baseball stadium, located in the back of Veterans Park. It was the annual Ike Blessitt fundraiser baseball game.
Ike is a former Detroit Tiger, and he invited fellow Tiger Juan Berenguer to host the game. It was kind of a mini-baseball fantasy game where anyone could join in to play — for a token cost.
Sunday was extra special for Ike, who played for the Tigers in 1972, because it was his 73rd birthday. 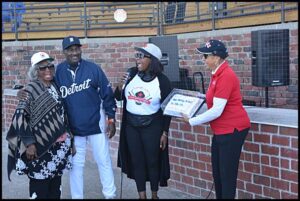 And yes, there was birthday cake shared too.
Yes, summer is over, but baseball still continues in these waning weeks of the pro season.
Hamtramck’s baseball stadium is no ordinary stadium. No, indeed.
This was the homefield of the Detroit Stars, who were part of the Negro baseball league back in the 1920s and ‘30s when African-Americans were not allowed to play in baseball’s major leagues.
We’ve come a long way since then.
The stadium was built exclusively for the Negro league and, for many years, after that league dissolved, it just sat there slowly deteriorating until local historians discovered its unique importance.
How important?
The stadium is one of only a handful that survive to this day that exclusively served the Negro league.
In other words, we have a national historical jewel here.
Better yet, there has been an influx of federal and grant money that has helped restore the stadium grounds and grandstand. A big thanks goes out to the Friends of Historic Hamtramck Stadium for its huge contribution in doing research into the historic context of the stadium.
That information was a catalyst to renovating the stadium – which is still an ongoing project.
It is an amazing experience to sit in the grandstands and look at the restored grounds – which has been maintained by the Hamtramck Stadium Grounds Crew.
At the game, in fact, were the two daughters of Detroit Stars’ legend Norman “Turkey” Stearnes.
Rosilyn Stearnes-Brown and Joyce Stearnes Thompson gave a soulful rendition of the national anthem to kick off the game.
All in all, Sunday was a great baseball day.
When it comes to good food and great times, Hamtramck has plenty to offer. In this column, we’ll talk about what’s happening at our bars, restaurants and at other events throughout the city.
Posted Oct. 7, 2022