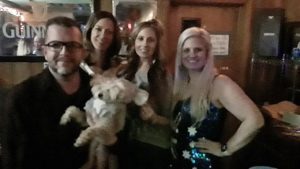 Michelle Slisinger (right), and others recently hosted a fundraiser at Whiskey in the Jar to help for the care of Australian animals who have been imperiled.

When it comes to good food and great times, Hamtramck has plenty to offer. In this column, we’ll talk about what’s happening at our bars, restaurants and other events throughout the city

By Charles Sercombe
Hamtramck is not only known for its many bars and its active nightlife, but also for hosting any number of worthy fundraisers.
On the whole, Hamtramckans are a generous bunch.
Such was the case last Friday evening at Whiskey in the Jar on Yemans St., just east of Jos. Campau.
City Clerk August Gitschlag doubles as a bartender there, and gave us a heads-up that his girlfriend, Michelle Slisinger, and others were hosting a fundraiser to help for the care of Australian animals who have been imperiled and injured by the fierce bush fires that have killed an estimated 500 million to one billion unfortunate critters.
Yes, you read that right. The fires may have even put koala bears in jeopardy of becoming extinct. Now doesn’t the thought of koala bears being burned to death tug at your heartstrings?
These fires have produced some hellish sights, and thrown the country into a crisis.
The cost to provide medical help and food for that many animals is astronomical.
So, it was heartwarming to see a packed house at Whiskey last Friday. As we went to press, Gitschlag said over $2,400 was raised.
The money will be forwarded to Australia Zoo Wildlife Warriors, which was established in 2002 by the late Steve Irwin and his wife Terri.
We also liked having Australia’s number one beer, Foster’s, on hand for a special promotion.
The idea for the fundraiser was so good, Gitschlag said Foster’s is going to replicate it in area bars in the coming weeks and months.
Now that’s something we heartily raise a toast to.
By the way, there will be another worthy fundraiser at Whiskey in the Jar. 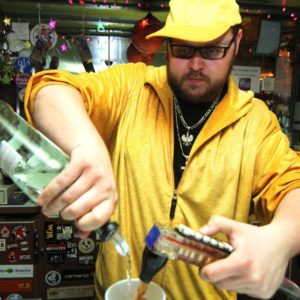 It’s the annual “Track Suit Hamtramck Boogaloo” fundraiser for Detroit Friendship House, which has been providing food to thousands of low-income folks in Hamtramck and Detroit for a number of years.
As the name suggests, you are encouraged to wear a tracksuit – but you are also encouraged to let your imagination run wild, and make it stylish and glam-fabulous. If you need a visual, take a look at the accompanying photo of Hamtramck’s own Konrad Maziarz.
The event is April 10 – which falls on Good Friday.
Feb. 7, 2020