Toast of the Town … Hamtramck Music Festival and more …3/1315 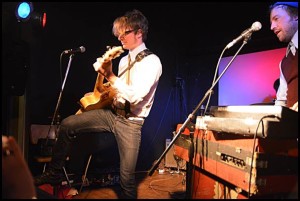 When it comes to good food and great times, Hamtramck has plenty to offer. In this column, we’ll talk about what’s happening at our bars, restaurants and other events throughout the city.
By Charles Sercombe
The crew here at Toast of the Town was challenged last weekend.
Why, oh why, did the Hamtramck Music Festival have to occur when Daylight Savings Time kicked in?
That made getting up on Sunday a bit of a chore. But are we complaining? Heck no.
Last year’s festival was overflowing with fun, and the goodwill everyone shared made you all goose bumpy with groovy feelings.
This past weekend, you could double that. It seemed to us there were even more people and more excitement around town.
The Festival has sort of taken the place of the Metro Times Blowout since Blowout organizers decided to expand that event from primarily in Hamtramck to more bars in Detroit and Ferndale.
Ever since that change, the Blowout has lost a lot of ooomph. The new festival was created to fill that vacuum, and it sure has breathed new life into the music scene.
And for 10 bucks for two nights on the town, it’s a mighty bargain.
The Toast crew started out Saturday night looking for a little fortification, namely a nice Polish meal at either the Polish Village Café or Polonia. Yeah, that didn’t work out.
Not surprisingly, the restaurants were packed, and the waiting time was something like an hour. Wow, we thought, the festival really spilled over.
We then took a detour to Buddy’s, because pizza really soaks up the alcohol. Also there was Hamtramck-based musician Eric Villa (who happens to live next door to the mayor) and his buddies who also couldn’t get a seat at our local Polish restaurants. 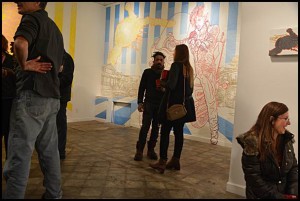 After a slice, we decided to make it a cross-cultural outing by starting things off with a visit to Hamtramck’s Public Pool Art Gallery, which was celebrating its fifth year of presenting edgy, fun shows.
Saturday was no exception. Hosting the night was Steve Hughes, who was his convivial self, grinning and drinking a beer.
Also on hand was former Hamtramck resident and globe-trotting environmental journalist Tom Clynes, who is off to Alaska next for a piece to be published in National Geographic.
If you’ve never heard of Tom check him out at tomclynes.com.
We were also impressed with the featured artist Tim Hailey, who also happens to be a founding member of the gallery.
One of his pieces, referred to as the girl from the famous Blind Faith album cover, and entitled “Bell Bottom Blues,” gave us a momentary flashback to our hippie days. Those were fun times way back when, and in many ways the world was a much more innocent place.
And wouldn’t you know it, on our walk down Caniff to Paycheck’s there was a dude smokin’ something, ah, referred to nowadays as a “medical” herb. Has anyone noticed the amount of this legal prescription drug you smell these days out on the streets? 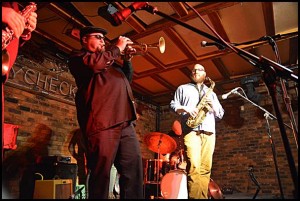 At Paycheck’s we were pleasantly surprised with the Miles Davis-like spaced out sounds of the James Cornish Ensemble. While we downed our shots of Bushmills, in walked Brad and Patty from Kelley’s Bar, who were taking part of the night off before heading back to work at their bar.
Brad said his place on Holbrook has really picked up in recent weeks from an influx of young adults who have been priced out of the Midtown area. Hey, Detroit’s loss is Hamtramck’s gain.
We were all settling in real nice and comfy and enjoyed the trippy lights, but duty called and it was off to PLAV Post 10 Hall and up their steep stairs to catch veteran garage rockers The Hentchmen.
It started out being sort of packed-in at the newly renovated hall and then it got shoulder-to-shoulder crammed. The band sounded like it was 1995 all over again. They actually had some folks dancing too, which is a rarity in these shoe-gazing days of modern music. 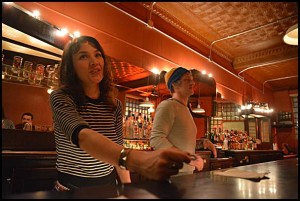 We scooted out of Post 10 to just go wherever the muse directed us, and we decided to make a pit stop at the just-opened Bumbo’s Bar on Holbrook. You old-timers will know it as the old Hank’s Bar.
You wouldn’t believe how new owners Tia and Brian Krawczyk have transformed what had been a crusty – and sometimes a little rough – old-man drinking bar.
Gone is the drop ceiling, which was all the rage in the energy-savings obsessed 1970s, and what became exposed is a beautiful tin ceiling. Note to all Hamtramck bars: If you have a tin ceiling covered up, expose it.
You can also actually see in there now and not have to worry about what lurks in the dark corners.
Plans call for opening a kitchen, which will feature Brian’s own Polish recipes.
Look for live entertainment at some point too.
As it turned out, we got so chatty with the pair and with some folks who dropped in, which included School Boardmember Maggie Srodek, that the hands on the clock turned to 1 a.m. a little too quick.
With Daylight Savings Time about to turn things an hour ahead, we thought it best to end there.
But this being Hamtramck, there is always next weekend to look forward to.