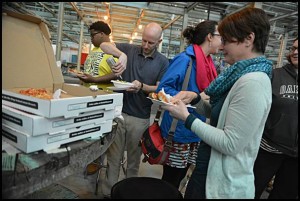 The recent fundraiser for Hamtramck’s HUSS organization drew dozens of supporters who enjoyed games of fowling at the Fowling Warehouse.

By Charles Sercombe
Sometimes the weeks fly by here in Hamtramck.
Lately, there has been no shortage of things to do around town.
Recently during one evening there were two interesting fundraisers. First up was a visit to Hamtramck’s newest sensation, the Fowling Warehouse, where Hamtramck United Social Services (HUSS) was hosting a get-together to raise money.
For a mere $10 you got pizza and two-hours’ worth of fowling. If you haven’t tried this sport yet, get yourself over there.
What you do is throw a football at a set of bowling pins, and the first one to knock down their set of pins wins. Sounds easy, right?
Well, how wrong you are. It requires throwing the ball low and straight, as opposed to up high and in an arch. Hard to do my friend, hard to do.
But this is the perfect game to drink beers as you play along, and thankfully the warehouse has a super long bar for folks to belly up to.
They also have a stage set up where bands play from time to time.
The money raised that evening will go to scholarships for Hamtramck High School seniors.
Next up was a dinner-fundraiser, called “Hungry for History,” at the Hamtramck Historical Museum where director Greg Kowalski also presented photos of the public schools from the early part of the 1900s.
The digitally transferred glass plates offered a fascinating glimpse into Hamtramck’s yesteryear when some 50,000 people lived in this city. 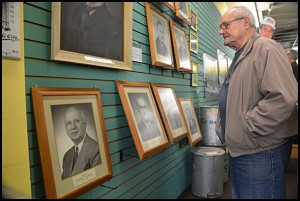 The Hamtramck Historical Museum also held a fundraiser, which featured dinner and a talk on Hamtramck Public School in the early 1900s.

If you haven’t been to the museum, get yourself over there now. While it’s still a work in progress, there are so many nifty artifacts you could spend a couple of hours poring over them.
One item leapt out.
For those who remember former Mayor Robert Kozaren – the city’s longest serving mayor — there is a slightly larger-than-life photo cutout of him standing on one side of the room. At first glance, dang if we didn’t do a double-take thinking it was the man himself standing there.
Bob has been deceased for several years now. He will probably go down in history as Hamtramck’s most popular mayor, and Kowalski reminded us that he was also a big fan of Hamtramck history.
“If he was still alive he would be here every day,” Kowalski said.
Bob also had a sizeable collection of Hamtramck and Michigan political items and other historical stuff that his family donated some of it to the museum.
As for the future of the museum, “We have a long way to go,” Kowalski said.
One of the first things they need to get is a furnace to heat the place. Also on their wish list is new flooring, restoring the original tin ceiling and a host of other things.
An architect has already worked up a new design for the interior that will maximize the displays.
Kowalski said there will be more dinner fundraisers coming, so stay tuned.