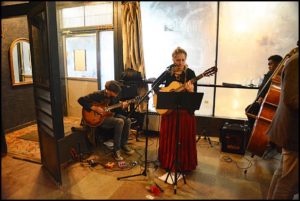 Hamtramck’s newest club is Barter on Jos. Campau. The bar specializes in modestly-priced cocktails and has a big city vibe about it.

By Charles Sercombe
A couple of weeks ago in this column we reminisced about the not-so-long-ago days when there were still “old geezer” bars that opened early in the morning.
We got a call from a distressed reader who objected to the term “old geezer.”
She thought it was insensitive to those who had worked the third shift during the night, and would then go to the bars in the early morning to wind down – much like people do after work during the day.
What upset her was that her dad was one of those people, and he was no “old geezer.”
Point taken, and like we said in the column we meant no offense since Toast of the Town is now officially of old geezer age.
The reader said a better term would have been “old school.”
Well, Toast is old school as well.
Anyway, the days of early morning bars here in Hamtramck are gone – likely for good. Hardly anyone has a night shift these days – or at least there aren’t enough of those folks to warrant any bar opening early.
So, we mention this because Toast and friends went to the opening of Hamtramck’s newest bar, Barter.
To tell the truth, we weren’t expecting to like it. In fact, we wanted to hate it.
Barter is part of a trend of bars specializing in fancy cocktails – and in most cases they have “fancy” prices to go along with their “crafted” cocktails.
And as just mentioned, Toast is old school. A shot and beer for us.
But times change, and Hamtramck is not immune to new trends.
The only way our bars are going to survive is to tap into new customers – people who appreciate the finer things in life, but maybe are feeling crowded out of the swankier joints in the metro area.
Barter, though, is not swanky or pretentious. Thank goodness. Instead, they serve up a nice range of specialty cocktails that are priced at $9 each.
That may seem like a lot, but these drinks are meant to be sipped to allow a warm glow to gradually take over. One member of our crew ordered a variation of a vodka and soda that she said smelled like summer.
On an unseasonably cold and snowy Saturday night, that was just the kind of thing needed.
And this place is down-to-earth enough to offer Pabst and a shot for a mere 5 bucks – which beats the price at a lot of other local bars.
The new owners came from New York, and wanted to be a part of the rebirth of Detroit.
They found their dream spot right here in Hamtramck – the “heart” of Detroit — and went to work restoring the building, where a travel agency had once operated. They peeled away a whole bunch of ugliness and uncovered a treasure.
You have to visit here to understand just what great care they invested to make this jewel sparkle again.
The atmosphere has a subdued big city vibe. The music, something like New York in the mid-70s – our favorite period.
It’s cool without being obnoxious about it.
And the clientele? We have no idea where they’re from, but definitely not Hamtramck.
It’s a welcome relief from the typical unwashed rabble we see week to week. (Kidding, folks, ease up.)
But be forewarned locals, these folks are pining to move to Hamtramck. They are youngish professionals being priced out of Midtown and Royal Oak and Ferndale.
They represent Hamtramck’s changing demographics.
Back to Barter (which is located at 11601 Jos. Campau, across the street from Woodward Throwbacks). Coming soon is the opening of a backroom space ideal for live music performances.
If this is the wave of the future for Hamtramck bars and nightclubs, sign us up. Toast is low-rent at heart, but we also realize that in Hamtramck, there’s room for everyone.
When it comes to good food and great times, Hamtramck has plenty to offer. In this column, we’ll talk about what’s happening at our bars, restaurants and at other events throughout the city.