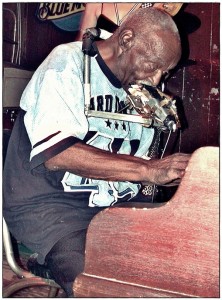 Let’s talk about the blues.

No, not the fact that it seems like everyone has a case of the blues. We’re talking about the blues as in playing and listening to the blues. Hamtramck was once home to one of the longest running blues bars in the metro area, the Attic.

The Attic was closed a few years ago and its space was revamped as Celina’s Sports Bar. We’ve got nothing against Celina’s for gutting the old bar and doing a total makeover. In fact, they did a really great job.

But we miss the Attic.

We also miss Uncle Jesse White, who played there almost every weekend. Uncle Jesse passed away two years ago at the age of 87. God bless his soul.

As a side note, one of the proudest moments for Toast of the Town was sitting in with Uncle Jesse White behind the drum kit. Lemme tell you, playing the blues is trickier than you think, especially with authentic cats like Uncle Jesse.

Because old blues guys like to play around with time signatures. In other words, they are all over place. You really have to listen close to keep up with them. It can be an exhausting challenge to the uninitiated. Uncle Jesse’s regular drummer, “Duke,” made it look so easy.

Those were fun times but truth be told, the blues doesn’t attract much of a crowd. Blues bars tend to attract crusty old guys and basically few to zilch in the hot babes department.

In other words, blues bars don’t make much money.

That’s why the Attic went through one owner after another. Each new owner thought they could turn things around.

So, the upshot is that the blues scene took a huge hit with the closing of the Attic.

But there’s good news. The blues is back in Hamtramck. Kelly’s bar on Holbrook is now the scene of a jumping blues jam. Bar owner Brad Ruff said he didn’t plan on bringing the blues back.

“We kind of stumbled on it by accident,” Ruff said.

Call it a happy accident. A loose jam session has turned into a weekly session.

Speaking of the blues, Ruff looks like a blues cat: he’s got the backward Kangol-style cap, a soul patch on the chin and a raspy voice.

Kelly’s Bar has been struggling in recent years so this shot of blues is a good thing. Ruff said he’s trying to attract more people during the 6 to 9 p.m. time slot by offering kitchen specials, such as 50 cent coneys and $1 beer specials. Wednesday, Friday and Saturday is open mic night but there is also a house band that he swaps out after a few weeks.

“You have to keep it fresh,” Ruff said.

I love to see you strut,
Up and down the floor
When you talking to me,
That baby talk
I like it like that
Whoa, yeah!
Talk that talk, walk that walk

As everyone knows, next Wednesday – the day before Thanksgiving – is the biggest bar night. That tradition has grown largely from college kids coming home for the holiday and also because a lot of people have Thanksgiving off so they want to go out and party before having to endure the pain of spending the entire day with their family.

We’re not sure what Hamtramck bars have in store as far as entertainment goes, but we do know that at the New Dodge Lounge it’s the return of The Orbitsons – a high-octane country/punk outfit.

If you do go out next Wednesday, watch out for extra police patrols throughout the metro area. With so many communities struggling financially, they rely on drunken driving arrests to rake in the dough.

Here’s one more plug for a fundraiser this Saturday (Nov. 20) at Hippo’s bar on Conant. Hippo’s is raising money to help fund a Christmas party for the school district’s Special Ed kids. For a mere $6 you can get a kielbasa or a meatball dinner. The party runs from 2 to 6 p.m.

Stop by and have a toast with Toast of the Town.