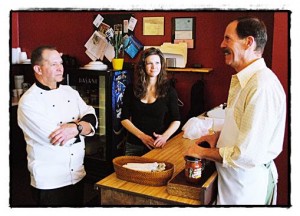 This week’s Toast of the Town picks up where an article in our paper two weeks ago left off: Maria’s Comida.

First of all, Maria’s was going to show up in this paper anyway – a key fact about their salsa was wrong. We reported that it has a shelf life of 30 days, but the truth is its closer to 365 days. The state mandates that it last at least 30 days, but the Pronkos (Maria’s’ owners) made sure they did it right so theirs stays fresh for a year. Once it’s opened it lasts for about eight days, but who really needs that long to finish a jar of salsa? Especially the Roasted Habanero with Mango.

Speaking of that particular salsa, did you know that the Ahmed brothers at Amar Pizza are using it as a sauce on one of their pizzas? It’s called the Southwestern Pizza, and though this writer hasn’t tried it yet, based on previous performances by both restaurants involved it’s probably safe to say that the pizza is delicious. (Kurshed, we’ll take a large thin crust next Thursday at 4 p.m.) Amar also cooks a pizza with the hottest pepper in the world – it’s called the Ghost Pizza – which may be the subject of a show on the Food Network, but that’s another story for another week.

Back to Maria’s, but we’ll stay in the category of TV shows. You see, the restaurant will soon be featured on an episode of Detroit Public Television’s show “Under the Radar Michigan.” The show follows host Tom Daldin as he explores everything that Michigan has to offer that is, well, under the radar. As he goes to museums, neighborhoods, businesses and restaurants, his goal is to discover the people, places and things that are unique about the Mitten State.

One of those unique spots happened to be Hamtramck’s own Maria’s Comida, so on Monday (Feb. 7), the cast and crew came to town to check out the eatery and sample some of the goods or, rather, some of the greats – whatever you want to call it, the food is fantastic. Anyway, the first thing that Haldin did when he got there was to sample the salsa. After he and his crew gave it rave reviews, they then went into the kitchen to watch some things get prepared.

During this time there was a lot of joking around between the Under the Radar guys and the Pronkos, and it was clear that everybody was enjoying themselves. They filmed a few items being cooked – Blackened Salmon with (here it comes again) Roasted Habanero with Mango Salsa, Asian Baby Back Ribs, Smoked Chorizo Spaghetti with Toasted Almonds and Chickpeas and Chile Garlic Shrimp – then it was time to dig in.

“It was a really good experience and we appreciate being chosen for the show,” said Marie (as in not Maria, strange as it may be) Pronko. “They were a great crew and a lot of fun to work with. And it will definitely help the business!”

Also helping the business was a Groupon sale that happened on Wednesday (Feb. 9). For those who don’t know, Groupon is a website that recently came out of nowhere to take the business world by storm. Essentially, it sells a company’s coupon at a discount price and splits the profits. For the Maria’s deal, you could buy $20 worth of food for $9, which was divided between the two companies.

Though getting only one-fourth of the menu price on items may seem like a raw deal – and indeed Groupon has been criticized for this very reason – in the case of Maria’s it brought in a ton of business. A total of 673 “groupons” were purchased, and the fact that only those who purchased the deal can get the deal means that the only money being spent (or, rather, not made) is money that comes from someone who has already become a customer by buying the discount.

Needless to say, you can expect Maria’s to be a little busier than usual, and that was just the case last Friday night (Feb. 11) when a camera guy from “Under the Radar” came back to film a regular dinner service. The seats were packed and the plates were stacked, and it can all be seen sometime in March on Detroit Public Television.

One Response to Toast of the Town . . . Maria’s Comida