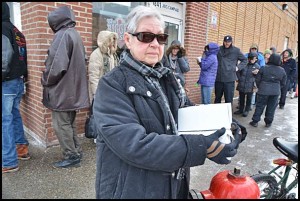 Paczki lovers waited up to two hours outside New Palace Bakery to purchase their pre-Lenten treats.

When it comes to good food and great times, Hamtramck has plenty to offer. In this column, we’ll talk about what’s happening at our bars, restaurants and other events throughout the city.
By Charles Sercombe
Bitter cold couldn’t prevent paczki lovers from invading Hamtramck on Tuesday.
And Monday, for that matter.
Although there may have been shorter lines at our two main bakeries offering up the pre-Lenten treat, people wised up this year and picked up their paczki on Monday to avoid Tuesday’s long wait.
At the bars, it was another matter. They were packed just like paczki are crammed with a gazillion years’ worth of calories.
For those who skipped paczki and went straight for the booze and festivities, the day for many started out at New Dodge Lounge where The Polish Muslims made their yearly appearance.
If you could get in, the first thing you were met with was a wall of steamy hot air. And for those who wore glasses, an immediate fog over. Somewhere, there was a cart dispensing the local favorite shot, “Jezy.”
After that, the brain fogged over and The Polish Muslims kicked things up a notch or two.
Another morning starter-upper was over at Whiskey in the Jar where a polka band got the crowd chugging beer and downing shots of – you guessed it – Jezy. 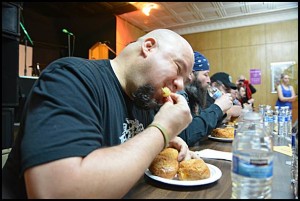 Reigning paczki eating contest champ Matthew Holowicki once again beat his competition, but also announced this was his last year to participate.

At noon, one could experience the longest 15 minutes known to mankind. At PLAV Post 10, the annual paczki eating contest took place, and seven-year reigning champ Matthew Holowicki was there to take home the trophy.
Holowicki did not disappoint.
At the 10 minute mark he already surpassed his record of 20-1/2 paczki, and by the end of it he had chowed down 23 of the doughy bombs.
It was also at this point that this reporter decided to skip lunch and possibly dinner.
Holowicki had some surprising news.
“This is my last time to compete,” he said.
A hush went over the crowd.
“I think eight times is enough – time to retire,” Holowicki added.
His record is going to be hard to beat. The second place-finisher ate a mere 10 paczki.
As Holowicki hoisted his trophy for the last time, a fellow in the crowd was heard saying: “That’s a man’s man.”
We also went off the beaten Jos. Campau path, where most of the action was, and stopped in Small’s Bar where Eastside Elvis was shaking his hips. 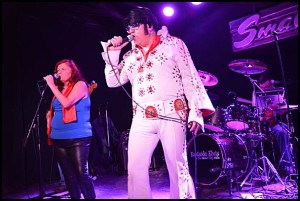 Inside were 20-somethings hitting the shots hard and yakking really loud. This was about 4 in the afternoon, and folks were pretty snockered.
Ah, to be young.
Eastside Elvis is no stranger to Hamtramck having played the Hamtramck Labor Day Festival for a few years now. We think.
No matter, we couldn’t think of a better combination of a 1970s version of fat Elvis and paczki.
Think about that for a moment.
Elvis and paczki.
Perhaps the most poetic moment of the day was when we ran into old Lili’s bar compadre Karl Wellman who handed us a special T-shirt he and some friends pitched in to create.
On the front of the red T-shirt was the saying “Je Suis Paczki.”
Translation: “I am paczki.”
It was, of course, in reference to the recent shooting massacre at the Paris office of the satirical magazine Charlie Hebdo, after which the phrase “Je Suis Charlie Hebdo” appeared on placards and T-shirts in France as a way to show solidarity with the victims and support of free speech.
Don’t ever forget the power of paczki to unite. 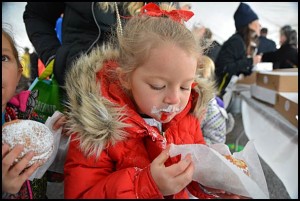 Passing the paczki tradition to the next generation.

One Response to Toast of the Town … Paczki Day 2015