Toast of the Town … Saying so long to Hippo’s 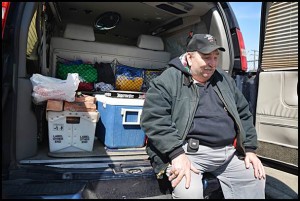 John “Hippo” Hypnarowicz hosts a tailgate party Monday while his former bar gets demolished. The bar was heavily damaged in a fire a few months ago.

When it comes to good food and great times, Hamtramck has plenty to offer. In this column, we’ll talk about what’s happening at our bars, restaurants and other events throughout the city.
By Charles Sercombe
On a day that Tigers fans celebrated opening day, John “Hippo” Hypnarowicz and friends were holding their own tailgate party in Hamtramck.
Except it had nothing to do with baseball.
Instead, Hypnarowicz, who everyone calls Hippo, and friends showed up around 9 a.m. to share drinks and watch the demolition of Hippo’s Bar on Conant.
“The Tigers had opening day, we had closing day,” cracked Hippo.
You could call it a case of gallows humor.
The bar burned beyond repair several months ago, no thanks to a faulty transformer hanging from a pole next to the bar’s garage.
The bar had been in business for over 30 years, Hippo said. For the last 24 years he and his wife, Mary, owned it.
The two-story red brick building came down pretty quick. The majority of the day was spent on scooping up the remains and hauling it away.
It’s another classic building, built in the 1920s or earlier, that spoke of a time when Hamtramck was a bustling city. Hippo’s, though, increasingly became a place out of time.

Conant is now the nerve center for Hamtramck’s thriving Bangladeshi business community. Most Bengalis are Muslim and don’t drink alcohol.
Hippo’s crowd dwindled over the years as the city’s Polish-Americans moved north to the suburbs. The bar once pumped with the energy of young adults. It was small by Hamtramck standards, with enough space for maybe 50 people, and that would be shoulder-to-shoulder.
But it was a fun place, and Hippo was a convivial host.
Hippo is a big stout guy with a huge heart for generosity. He recently retired as a bus driver for the public school district, and every Christmas he would throw a party for the Special Ed kids he drove to and from school for 30-plus years.
Toast of the Town can remember certain winter nights when huge snowfalls prevented driving anywhere and walking down the block to make a night of it at Hippo’s was the only option .
Those were special, fun times.
In recent years, it hasn’t been so much fun for Hippo, who clashed with his Bengali merchant neighbors. He bristled at the yearly Bengali Festival because it blocked parking in front of his bar, and festivalgoers were non-drinkers.
So … with mixed feelings, let’s raise our collective glass for one last drink to Hippo’s, a bar now regulated to history.
Throw back … Remember those track suits from the 70s that people would wear casually just about anywhere?
Think Burt Reynolds.
Well, time to burnish that image and bring back those free-wheeling decadent days of the 70s at tonight’s “Track Suit 2 Hamtramck Boogaloo” at one of the few remaining neighborhood bars, Whiskey in the Jar.
The event is sponsored by Hamtramck’s City Clerk, August Gitschlag, who once bartended at the Whiskey.
It’s a fundraiser for charity, and it’s also a fun-raiser. Stop by and show off your threads Friday, April 4. Whiskey in the Jar is located on Yemans, just east of Jos. Campau.