Toast of the Town: Skipper’s Hamtown 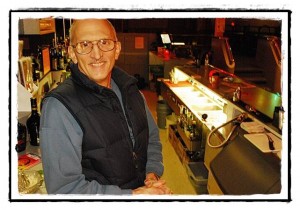 In Hamtramck, a weekday is as good a day as any to have a drink. And that the drink is for a good cause, well, that’s even better.

Thus the scene was set for Wednesday (Dec. 1) night at Skipper’s Hamtown. The upstart business, which was opened just under a year ago by the venerable bartender Nolan “Skipper” LaFramboise II, hosted yet another event for the good of the community.

This time around, Skipper’s opened its doors (once again) to the city’s local artist collective, Hatch. The purpose of the event was to bring people in to get out the vote.

Wait, vote? That’s right – vote. It seems that our friends at HATCH are in the midst of a competition to bring in $50,000 worth of funding to fix up the building that will eventually become its home.

The competition is called the Pepsi Refresh Project and it runs from now until Dec. 31. An online contest that gives grants ranging from $5,000 to $250,000 based on the number of votes an idea receives, the Refresh Project has the potential to actualize the dreams Hatch has had of opening up its own exhibition and studio space.

Hatch is a grassroots non-profit that organizes and promotes the arts in and around Detroit. It would use the grant money to complete the renovation of Hamtramck’s former police station, which it purchased in 2008. Once completed, the space will offer an art gallery, 12 artist studios, a gift shop, a classroom and a community work space that will feature a darkroom, a kiln, a printing press and more.

“This grant would help us open our doors quickly,” said Chris Schneider, founder and president of Hatch. “We have completed many major repairs. This money would enable us to finish off the details.”

If you’d like to do your part to help out HATCH, log on to www.refresheverything.com and type in “Hatch”. Once there, you’ll be able to vote for the project once a day until the end of the month.

While Toast was at Skipper’s Hamtown, it was a perfect opportunity to chat with Skipper. If you haven’t met him before, you’re probably a shut-in or you just turned 21. You see, Skipper has been kicking around the Detroit bar scene for decades.

Back in the late 60s, before he was a bartender, Skipper went to school to be a teacher and got a bachelor’s degree from Central Michigan University. But since then, the closest thing he’s come to being in a classroom is serving a bar full of students. After graduating from CMU, he went right into the bar and restaurant industry with a job at Joey’s Stables in Del Ray. He never looked back.

“It was a great job, so I just stayed in the business,” says Skipper as he rubs lipstick off the rim of a wine glass.

As we talk he breaks away to take care of another customer. When the man compliments him on his jukebox, it sends Skipper into a five minute riff about the area and the way that it used to be flush with some of the greatest blues and jazz musicians of the time.

In the early 80s, sometime after his stint at Joey’s Stables, Skipper became the general manager of the Soup Kitchen Saloon, a jazz bar that helped revitalize the area formerly known as the Warehouse and Rivertown districts. Back in those days, all the big blues names – including the likes of Willie Dixon, Luther Allison and Koko Taylor – would pass through.

“If you talk to anyone about blues and jazz bars they’ll tell you the Soup Kitchen Saloon was the place,” says Skipper.

When his time at the Soup Kitchen Saloon had run its course, it gave Skipper the opportunity to open up his own place, which he did in 1982 with Skipper’s Stray Dog, a lively joint in downtown Detroit located in the old Michigan Theater building on Bagley Street.

By then he had already worked at dozens of places in the area. Skipper explained that he always kept two or three jobs, and when he’s asked to name a few off the top of his head it’s almost comical. Just a sampling of his jobs reveals tenures at Major’s Restaurant, Vinnie’s Place, Grosse Isle Country (and its Racquet) Club, Wendy’s, Chi Chi’s, Pantele’s, Francesca’s, Henry’s Place – the list just keeps going.

“I loved it,” says Skipper about his days owning the Stray Dog. In the bar’s glory days he had a regular crowd and business was booming. Even weaker nights like Sunday brought people in, but after a bout of negative publicity centering on crime in downtown Detroit dried up his business in the early 90s, after fully recovering he closed up shop in 1996.

Two years later he packed up and moved to San Francisco, where he continued to tend bar, wait tables and cater events – “You know, the bar and restaurant business,” as he puts it. Though he enjoyed his time there, he was forced to return to Michigan in 2000 after his house burned down. At that time the tech bubble had not yet burst, so he couldn’t find another place that was affordable enough to live.

“There were lines to get a place back then,” he said. “People were cutting rooms in half with a curtain and subletting them – it was crazy. And you couldn’t go to the bad part of town and find a room in a fleabag motel.”

Upon his return to Michigan, Skipper once again focused on a lifelong dream: owning a bar in Hamtramck. He says that even back in the Stray Dog days he wanted to have a bar in Hamtramck, which he says had an incredible bar scene in the 90s. And according to Skipper, he’s tried to buy practically every bar in the city. Eventually finances and opportunity met in the middle, and in November of 2009 he purchased the old Chill and Mingle bar at Conant and Evaline.

Renovations began immediately, and by January of 2010 he was open for business. Since then, he’s tried to become a part of not only the Hamtramck bar scene, but the community itself. To accomplish the latter, he’s been adamant about hosting events for non-profits and community organizations. He says he wants Skipper’s Hamtown to be a “community center” and a place for people to just come and have a drink and a conversation at. Knowing that, it makes perfect sense that he’ll be hosting a “Toys for Tots” drive next Friday (Dec. 10) night.

It’s becoming part of the Hamtramck bar scene where Skipper has somewhat sputtered. He’s up against two big challenges: the economy and the habits of Hamtramck’s bar patrons. Maybe it’s the location, or just a general unawareness, but he feels he hasn’t quite been accepted just yet. It’s something that may take a while, but in the meantime he’s got a few tricks up his sleeve. One of them, which stems from his visits to other area bars and restaurants, is an “Owner’s Group Therapy” which, as it sounds, would be an opportunity for business owners to vent their frustrations once a week in the company of those who would understand.

` As for the economy, Skipper says that it’s just something that will have to be weathered. Business is down across the bar and restaurant industry on the whole – and in most other sectors, too – but he says that everyone has just got to stick together as a community and this too shall pass. In the end he’s optimistic about the future, which he sums up in true Skipper fashion:

“Once the economy gets better, I’ll sail through,” he says.

Skipper’s Hamtown celebrates its one-year anniversary on Saturday, Jan. 15. Stop by for a good drink and a great time.

One Response to Toast of the Town: Skipper’s Hamtown