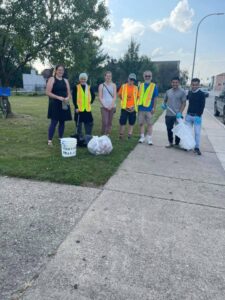 “Trash, go pick it up, don’t throw your love away…”
The New York Dolls

By Alan Madlane
If Hamtramck looks any cleaner to you on a given day, it might be the work of some local “angels.”
That would be the Hamtramck Street Trash Team, a volunteer group of folks who try their level best to keep their city presentable.
Mainly organized through a Facebook group now called “Hamtramck Trashies Reboot,” and with 70 members at present, folks seemingly just post that they’re going to be working to clean a certain street or area on a given day and time, often requesting help or supplies from anyone else willing to provide such.
Readers of this paper may well remember the Plague Trash Doctor of last year, who meandered the streets menacing messes with his trusty clean-up gear.
For whatever the reason(s), PTD ceased operations, but, perhaps inspired by this individual, in their place sprang up the Hamtramck Trashies.
A group of five people (Max Ryan, Angela Fortino, Jennifer Newton, Diana Elizabeth, and Phillip Kwik) are listed as Co-Administrators and Moderators.
A post from Kwik, dated July 30, recounts work that was done on Conant, from Prescott to Holbrook; and on Trowbridge, starting from Gallagher.
This work apparently generated 15 bags full of garbage. Yikes, people of Hamtramck, have we ever heard of throwing things away like civilized and responsible residents?
How about a little civic pride?
Further down the comments of the same post, city council candidate Amanda Jaczkowski posted that she and a couple others worked Conant as well, from Caniff to Holbrook, and filled 10 more bags’ worth of trash.
And if that seems like overlap with the first group, the guess here is that they worked opposite sides of the street.
Which only serves to underscore the above point: the city streets ain’t your dump, chump, so next time, get off your rump and throw that junk in your trunk.
Were you raised in a barn?
Toast of the Town reached out to the Trashies for comment, but we did not hear back – no doubt because they were too busy picking up litter.
In a bit of a more serious tone, let us give gratitude for the proud and civic-minded among us, who have taken it upon themselves to try to beautify Hamtramck for the benefit of all.
Seems like a great group, and a worthy cause.
Go-go Trashies!

When it comes to good food and great times, Hamtramck has plenty to offer. In this column, we’ll talk about what’s happening at our bars, restaurants and at other events throughout the city.
Posted Sept. 17, 2021