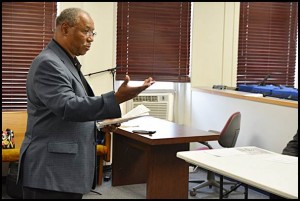 Former Detroit mayoral candidate Tom Barrow tells the Wayne County Board of Canvassers on Monday that the August Primary Election was rife with fraud in favor of the top vote-getter, Mike Duggan.

Tom Barrow, a perennial candidate for Detroit mayor and a convicted felon who served 13 months in prison for tax fraud and filing false tax returns, dropped a bombshell at a meeting of the Wayne County Board of Canvassers.

The county board had just completed its recount of the Hamtramck mayoral election and the city council race for the two-year term and was discussing non-Hamtramck issues before adjourning.

One of the issues the board took up was Barrow claiming massive voter fraud in the Aug. 6 Primary for Detroit mayor. He said a number of his election challengers witnessed “thousands and thousands” of write-in ballots that had the exact same handwriting.

(Editor’s note: Barrow was a candidate in this election. Mike Duggan ran for mayor as a write-in candidate, and won by a landslide. If he goes on to win in the November election, he will be the first white mayor since the days of Coleman Young.)

The most explosive of his claims was that he knows a guy who knows a guy who works for a Detroit school contractor (Sodexo Food Service) who said that he was told to open a door at the Charles Beckham Academy in Detroit on Dickerson St. on election day.

He then said that a group of “white men” arrived after 8 p.m. on election day carrying ballot transfer containers and blank ballots stuffed under their arms. The men then proceeded to set up laptops and began emailing. Barrow also said the men were in cahoots with the Detroit City Clerk to find out how many ballots needed to be stuffed to win the election.

Eventually, Barrow said, this witness saw a “large white man” arrive, who was referred to as “boss,” and told the men to gather up their stuff and leave.

What Barrow wanted the Board of Canvassers to do were two things:

When recounting the write-in ballots, they should lay 10 of them at a time face up so his challengers can compare handwriting. It was unclear if the board agreed to this.

He also wanted the board to start sending subpoenas to a number of people, including the witness at the school, which the board agreed to.

Consider that Barrow was convicted of filing false tax returns, emphasis on the word “false.”

Also, why would this group of “white men” gather at a school where there might possibly be witnesses? Wouldn’t this nefarious group of ballot stuffers meet in someone’s basement or garage, or anywhere they would not be seen?

One Response to Tom Barrow visits Hamtramck and drops the bomb