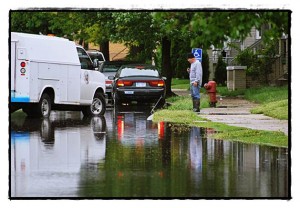 Wednesday’s citywide flooding may have had a few people wondering if someone nearby was building an ark.

Turns out that the flood quickly receded, but in its wake it had left a large and nasty cleanup for many households. Two inches of rain fell in less than hour, overwhelming the city’s sewer lines.

A number of people reported that sewage water had backed up in their basements. Some reported as much as four feet of water.

Marge Czarnik was walking from her Trowbridge St. home with a bottle of bleach in her hand. She was going to her mother’s house to disinfect the basement, which had been flooded.

“A lot of bleach will be sold today,” she said.

Some streets also became impassable, especially under viaducts on Jos. Campau and Holbrook.

DPW crews were sent to the worst spots to remove sewer grates in order to allow faster drainage.

Hamtramck has always had a flooding issue, which shouldn’t surprise anyone considering this area once used to be mostly swampland. In fact, the neighborhoods east of Conant near Caniff have long been nicknamed “Ducktown.”

The ongoing flooding problem has ended up in court where a group of residents are suing the city for past damages.

One Response to Torrential rains lead to massive flooding in area