Treasurer is wasting no time going after deadbeats 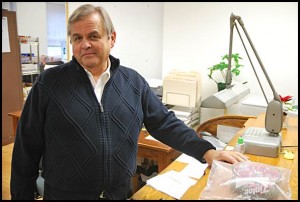 City Treasurer Mike Wilk had been working part-time for the past few years, but recently the city council agreed to bring him back full-time with a salary. The council wants Wilk to go after money that is owed to the city.

The City of Hamtramck and newly-appointed City Treasurer Mike Wilk used to just be friends with benefits, but at a recent city council meeting the relationship was made official.

After two-and-a-half years of working on a part-time, uncompensated basis, on Nov. 27 Wilk was hired for the position full-time.

Along with the “new” title there is also a new focus — reconciling overdue account balances.  Additionally, the Treasury Department will also look for ways to make things more economically efficient.

“If we can streamline things financially, that will be a priority,” says Wilk. “But the real challenge is to get all the money we are owed.”

According to Wilk, who has a degree in accounting from Wayne State University, the challenge of collecting this money is the fact that oftentimes a business will either fold or re-organize under a new name. And while this loophole has been somewhat effective in the past, it’s not going to work this time around.

“We are going to actively go after personal property tax bills,” says Wilk. “First we’ll send a letter asking for payment, and if there’s no response the next step could be closing the business.”

It might be a harsh statement, but under the guidelines of operating a business in Hamtramck it actually makes sense. If a business does not pay its personal property tax it can’t get a license to operate. However, no action will be taken until it’s cleared with the city’s legal department.

“We’re not going to do anything we aren’t allowed to do,” says Wilk. “We dot our I’s and cross our T’s.”