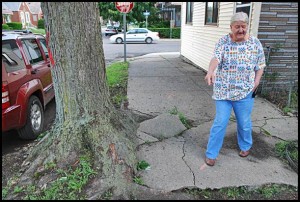 Through a Freedom of Information Act request, The Review obtained billings submitted by Platinum Landscape, Inc. for the removal of the trees.

All but two of the billings listed the price of removal for each tree at $790, which included grinding down the stump.

Although money for the project did not come out of the city’s general fund, it came from a state street repair fund (called Act 51) that all taxpayers pay into. The tree removal was a smaller part of the project that cost about $300,000.

It was not long after the first tree came down before there was public outcry to save the trees and prevent further removals.

The program was rolled out several days before Emergency Manager Cathy Square arrived in Hamtramck, on July 1.

She allowed the sidewalk portion of the program to finish up, but instead of removing trees that had caused sidewalk slabs to buckle, she had the cement contractor remove the offending roots.

As for the cost of the tree removal, Square, a former director of Public Services in Hamtramck, said the $790 price tag for each tree does not seem out of line.

In a review of other tree service companies, the cost of removing a tree varies from $500 to $2,000 — depending on location and size.

Platinum charges $790 to remove a tree that is 36 inches in diameter or larger, according to its contract with the city.

One Response to Tree removal came with a hefty price