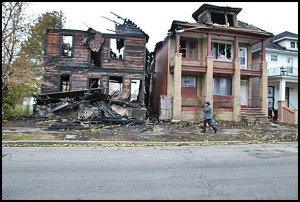 A vacant house on Lumpkin St. caught on fire last Sunday night. The fire spread to an occupied house next door.

Hamtramck firefighters have had some bad luck in two recent fires.

A few weeks ago while battling a house fire, one firefighter received burns on his ears despite wearing protective gear.

Last Sunday, two firefighters were injured while putting out a house fire on Lumpkin St. One received cuts from glass going through his glove and another firefighter was overcome with smoke inhalation.

All but one of the firefighters have recovered. The firefighter who suffered from smoke inhalation should be back to work soon.

Sunday’s blaze started shortly before midnight in a vacant house on the 8000 block of Lumpkin. Fire Chief Paul Wilk said that about an hour before the fire broke out a neighbor had called police because he thought he heard someone trying to break into the empty house.

Officers checked out the house but found no one.

Because of strong winds, the fire quickly spread to an occupied house next door. Both houses were destroyed, but Firefighters were able to stop the fire from spreading to another occupied house.

Wilk said that he assigned four additional firefighters to be on duty for Angels’ Night and Halloween to be on the safe side.

Angels’ Night – the night before Halloween – was once commonly called “Devils’ Night” in the Detroit area. It was a night when teens and youngsters would perform harmless pranks on homeowners, such as soaping windows or dressing up trees with toilet paper.

But the tradition grew much more sinister in the 1980s when people started house and building fires. A campaign then began to change the name of the night to Angels’ Night and urge the public to stop the arsons and vandalism.

The campaign paid off, and now the night is one of the safest in the metro area.