UAW strikers at Poletown get a special visit by candidates 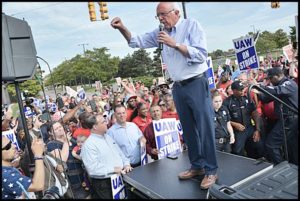 Democratic presidential hopeful Bernie Sanders speaks to UAW strikers and their supporters on Wednesday at the GM Poletown plant.

By Charles Sercombe
UAW strikers at the GM Poletown plant got a boost this past week with visits by Democratic presidential hopefuls Elizabeth Warren and Bernie Sanders.
Warren stopped by on Sunday morning, and Sanders gave a short, rousing speech Wednesday morning.
The Review was unaware of the Warren visit, but was there for Sanders’ stop by.
However, former City Councilmember Catrina Stackpoole was on hand, and got an impromptu meet and greet with Warren.
Stackpoole was carrying a sign that said: “Make electric cars here!”
Warren noticed the sign, came up to her, and said she liked it.
“I told her good luck,” Stackpoole said, and Warren replied: “We’re going to do this together.”
Prior to Sanders’ visit, hundreds of union strikers and their supporters walked in a circle at the main entrance of the plant, alternating their chants.
Some of the chants included:
“We are a mighty, mighty union”
“Equal pay, equal right”
“No contract, no cars”
“Corporate greed has got to go, ho-ho” 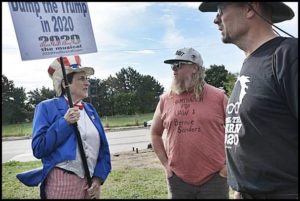 Hamtramckan Frank Woodman (center) talks with a striker who was dressed as Uncle Sam.

One striker was dressed as Uncle Sam and carried a sign saying: “Dump the Trump, 2020.” And under that promoted “2020, the musical.”
Next to the picket line was a huge inflatable corporate “fat cat,” with one paw squeezing a worker by the throat and the other clutching a bag of money.
A banner under it read: “Shame on General Motors”
For those hoping to get fired up by Sanders, they were not disappointed. Speaking on the back of a pickup truck parked in the median, Sanders gave a rousing, 10-minute speech supporting the workers and admonishing General Motors.
Sanders, looking trim and full of energy, with his hair tousled by a brisk wind, thanked the strikers for “standing up to corporate greed. Working people of this country just want justice.”
He noted that GM took a $50 billion bailout when the auto industry almost tanked in 2008, thanks to American taxpayers.
In return, he implied, GM turned greedy, giving its current CEO a $22 million a year salary while cutting off health insurance for the strikers.
“The workers here are saying: Enough is enough.”
He warned that if he is president, General Motors better not count on lucrative federal contracts if it continues to mistreat workers.
“If General Motors thinks, that after they treat their workers like crap, that they’ll go to Washington and get huge federal contracts, they’ve got another thing coming to them,” he said.
“We want companies in this country to be decent corporate citizens, and to treat their workers with respect and dignity.
He gave the strikers, hope, too. 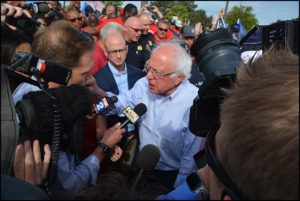 Workers across the country, he said, “are looking at your courage and pride and your standing up for justice. … What we’re saying to the one percent is, you cannot have it all.”
The economy, he added, must be fair to all, “not just billionaires.”
There to show his support for the workers and Sanders was Frank Woodman of Hamtramck.
Woodman, 54, is a musician and a registered nurse. He said the nurses at his hospital are not unionized.
“Bernie has been fighting the good fight for a very long time, and we hope 2020 is his time!” Woodman told The Review.
Although only a small portion of the Poletown plant is located in Hamtramck, there is a lot at stake for the city.
GM previously announced it was shutting down the plant this January. If that were to happen, the city would lose $800,000 a year from a special deal with GM. The company makes that payment in lieu of paying property taxes. 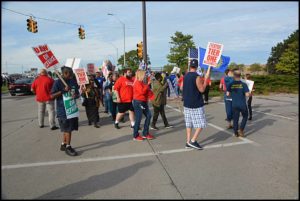 That loss of revenue would be financially devastating to the city, and could tailspin the city into a third budget crisis. Two other financial crises over the last 20 years caused the state to step in each time and appoint an emergency manager to take over management of the city.
GM is now offering to keep the plant open, as one of its contract terms with the UAW. As of this week, there was no sign that the two sides were any closer to a new employment contract, however.
Sept. 27, 2019