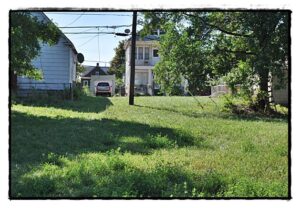 Most of the tax-exempt properties in the city belong to Hamtramck. The city owns over 70 empty lots that are now being auctioned off in batches for housing development. File Photo

By Charles Sercombe
For a city that’s only two-square miles, Hamtramck has a lot of tax-exempt properties.
In response to a Review Freedom of Information Act request, the city lists 229 buildings, municipal-owned parking lots, places of worship, schools, veteran posts, a county jail, vacant lots, and more, that Hamtramck does not collect property taxes from.
In total, there are about 7,000 properties in Hamtramck, most of which do produce property taxes.
Property taxes are no small matter. The city is projecting to collect $6.6 million in those taxes this fiscal year, which started on July 1 and ends next June 30.
That chunk of change is the largest revenue source for the city. The next highest amount of revenue comes from state revenue sharing at $4.5 million, followed by income taxes at $2.3 million.
Hamtramck is the biggest owner of properties that do not pay taxes, which includes buildings such as city hall, the fire station, parks, and, mostly vacant lots.
The Wayne County Land Bank also owns over 30 properties that it received from tax forfeitures.
Fortunately for the city, it is in the process of selling off its vacant lots. At one time, those lots, which are mostly located in the city’s southend, had homes on them.
Many of those houses were abandoned in the 1980s, and subsequently became victims of arson.
There are now large patches of vacant land on the southend of town.
So why have the lots been vacant for so long?
Hamtramck was forced by a federal court order to not sell the lots until a 1970s-era housing discrimination lawsuit was settled. In an eventual consent agreement, the city was ordered to build 200 housing units.
That order has largely been fulfilled in the last several years – once outside funding made housing construction possible. The last three housing units will soon be built to satisfy that agreement.
In the meantime, the city was given the green light a few years ago to sell off the remaining lots.
The city has been selling batches of lots, but those sales come with a string attached. The lots have been sold for a minimum bid of $10,000 that requires the purchaser to build a housing unit on the lots within a year.
There are over 70 more city-owned lots to go up for auction.
With a housing shortage in the metro area and the country, developers are indeed snatching up the lots. The proceeds from those sales must go toward the city’s pension obligation, as ordered by the city’s last state-appointed emergency manager.
However, the city will collect property taxes and income taxes from those developments that will go into the general budget. Also, some of those units will include rentals, which means the city can also collect income taxes from those residents.
The second-most number of tax-exempt properties are churches, mosques and Islamic centers, with almost 40 such sites.
That number of religious property exemptions bloomed in the last several years as more mosques were created, which related to the increase in the city’s population of those of Muslim faith.
The number of charter schools has also increased over the last several years.
There are now about a dozen charter schools in the Hamtramck area competing for students with the Hamtramck Public School District, which owns several buildings in the city.

(This is an edited version of the print article.)
Posted September 23, 2022