Vandalism and its costs plow under Hamtown Farms 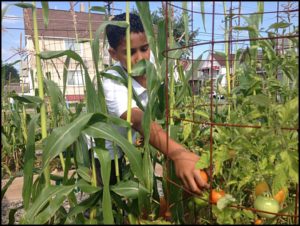 Hamtown Farms is permanently closing, and the tools and equipment the organization has will be donated this Saturday to fellow non-profit groups.

By Charles Sercombe
Hamtramck’s community garden won’t go through another growing season.
Michael Davis, a co-organizer of Hamtown Farms, a registered non-profit organization, announced the end of the garden this week.
In a post on the Hamtown Farms Facebook page, Davis said:
“We have some sad news to share. Unfortunately, due to a recent rash of vandalism and destruction (and seven years of continued vandalism and destruction), Hamtown Farms will be closing.
“We feel it is no longer prudent to continue to apply our money, time and effort, nor is right to ask others for their money, time and effort to support our mission of providing accessible green space for the community.
“We thank everyone who, for the past seven years, have supported us in our efforts.”
Some of the damages over the years included people ruining trees, garden beds being destroyed and the water collection system being vandalized.
Davis and Hamtown Farms co-organizer Andy Rice will be donating the garden’s tools and equipment this Saturday (April 27) starting at 10 a.m.
Hamtown Farms is located at 9026 Lumpkin, just south of Holbrook.
Donations will only be given to fellow non-profit organizations. Proof of your organization’s non-profit status must be provided before a donation can be made.
Davis told The Review that the garden lots will eventually be sold, according to the rules governing non-profit organizations.
Hamtown Farms allowed residents to plant their own garden and also allowed people to pick fruits and vegetables that were grown in the communal area.
The site also hosted a number of weddings and picnics.
News of the closing shocked a number of residents. Here is just one comment:
“I’m so sorry to hear this. Hamtown Farms is one of the things that makes this community unique. You will be missed,” said Alice Kopecky on the Hamtown Farms’ Facebook page.
Despite the bad news of closing, Davis asked that the community “To not focus on the bad of today, but the good of the past seven years.”
April 26, 2019

One Response to Vandalism and its costs plow under Hamtown Farms