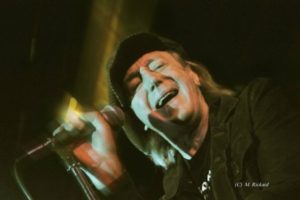 Music legend Scott Morgan has been in the music business since the 1960s. He is well-known to a number of Hamtramck musicians. Photo by Marty Rickard

(Editor’s note: Hamtramck is home to many musicians who record, put out albums and tour the world. Freelance writer Susan Kirwan writes about the challenges facing musicians.)

By Susan Kirwan
Special to The Review
The tri-counties of Macomb, Oakland and Wayne are home to many talented musicians, some famous, some not, in every music genre.
But how much of a chance does a musician have of making it today? Or, has the definition of success changed?
“There’s no change of definition” says Ann Arbor native and veteran musician, Scott Morgan (most recent album: Scott Morgan Rough and Ready, Rouge Records 2017).
“Making it,” he continues, “still means becoming popular, making money, being respected as a musician, being known internationally. … Musicians today have about as much chance at this as winning the million-dollar lotto… as becoming a sports star.”
But isn’t it easier to achieve success than ever before, thanks to do-it-yourself internet promotion, video, and crowd funding?
That makes the field of music more wide-open, doesn’t it?
Morgan says, “Not true. You cannot be successful if you don’t go through the normal way of putting big money behind it, publicity and marketing. You need a lot of money to get television, radio, internet, and magazine advertising. Selling records out of the back of your car isn’t going to make money.”
The do-it-yourself-musician “is going up against heavy-duty weapons with a popgun,” he says.
If heavy-duty weapons are million-dollar advertising budgets, then who has millions of dollars to spend on advertising and distributing music to global markets?
According to Morgan, “multi-million-dollar-in-profits record companies control the market” — partially due to President Reagan-led attacks on anti-trust law.
Morgan tell us, “Today, there are only three major record labels, Universal, Sony, and Warner Communications. … There are some independent record labels, but most are actually owned by one of these three, and for these three it’s about the best-selling music, not about the best music artistically.”
Basically, “businessmen dictate what Americans listen to. Music industry businessmen are not musicians, have never studied music, don’t know good music from bad,” says Morgan.
But what about streaming, the act of downloading music via Apple, Pandora, and Amazon? Doesn’t that bypass business-executive notions of good music, allowing for a wider audience than ever before, increasing the chances for composers and musicians to make a living at it?
Morgan answers, “Streaming is a way that corporation executives dictate who profits, and it is not the music writer or recording artist.”
Morgan is not the only musician who has remarked on “income inequality” caused by streaming. On March 22, famed composer Janis Ian posted on Facebook: “People played my songs on Apple, Pandora, and Amazon 37,473 times and at best I made $3.18.”
Seems that streaming is just one more way music-media conglomerates circumvent anti-trust laws, copyright law, and fair business practice. This has dire financial consequences for U. S. music professionals throughout the United States, and not just in tri-county southeast Michigan.
Since 1891, performing classical or popular music at Carnegie Hall was seen as a prestigious pinnacle of success, but here, too, the changing music-business paradigm does not include artistic excellence. Morgan quips, “How do you get to Carnegie Hall today? You rent it yourself.”
(Susan Kirwan is professor of anthropology at Macomb Community College and a freelance writer. You can reach her at susank2015@outlook.com)