Veterans Park’s historic grandstands are on a winning streak 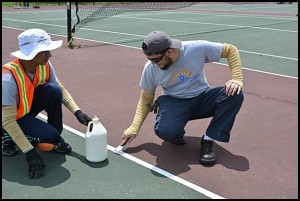 Hamtramck High School students have been hired as interns for General Motors and are making repairs at Veterans Memorial Park this summer.

Following the recent clean-up of the area around the grandstands by our firefighters and volunteers, General Motors has now stepped up to the plate.

GM is sponsoring a huge fix-up of the park by donating the time of three adult mentors and hiring a dozen Hamtramck High School students.

Their teen spirit will be focused on repairing the fence at the tennis court, moving and improving the little-used playscape, removing graffiti from the grandstand area and picking up the litter.

GM is also considering a donation between $7,500 and $10,000 to go towards park improvements and ongoing maintenance.

The historic grandstands are on an unprecedented winning streak. In July 2012, the grandstands were awarded a spot on the National Register of Historic Places. While the historical designation is no guarantee that the structure is out of danger from demolition, vandalization, or the elements, it does help when it comes to applying for private and public grants.

Speaking of funding, the Hamtramck Economic Development Corporation has applied for a grant from the state Department of Natural Resources that would be used to boost the recreation potential of Veterans Park.  If this relatively large grant comes through a planned trail around the park — possibly connecting to other area bike trails — is part of the overall scope of the planning.

To recap:  The Hamtramck Stadium was built in 1930 and opening day saw 9,000 people in attendance.

The stadium was home to the Negro League Detroit Stars.  Ty Cobb threw the first pitch on the stadium’s opening day, and legendary pitcher Satchel Paige and Negro All-Star Turkey Stearns rounded out the roster of other luminaries who played the field.

The stadium is one of only 12 surviving Negro League stadiums in the country. The push to refurbish the stadium was initiated by Friends of Historic Hamtramck Stadium and is supported by many other local organizations.

For more information about the history of Hamtramck Stadium, visit HamtramckStadium.org.