Volunteers hit the streets to remove trash and litter 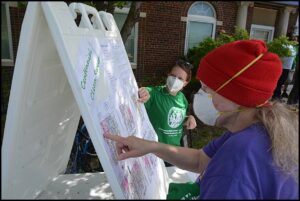 Last Saturday volunteers took part in a citywide cleanup that celebrated the city’s centennial anniversary this year, and it hopefully inspired others to continue picking up litter throughout the city.

By Charles Sercombe
Last Saturday’s citywide “Centennial” cleanup didn’t have a large turnout, but it certainly made a start in tackling the endless amount of litter in Hamtramck.
About 30 volunteers turned out, including several firefighters, on what was a sunny and warm day.
It was promoted as a centennial cleanup because Hamtramck is observing a special anniversary this year, celebrating being incorporated as a city 100 years ago.
No doubt, litter was not an issue back then. In fact, Hamtramck enjoyed a reputation of being pretty clean for an urban area.
In the mid-1950s, one of the leading national magazines dubbed Hamtramck as the cleanest city in America.
Unfortunately, the city has a long way to go before reclaiming that distinction. As Hamtramck became more of a transient community, folks apparently started caring less about how it looked.
Well, no use dwelling on the past.
On Saturday, volunteers were given locations to zero-in on, but really, there is no shortage of trash to be found in the city.
Armed with large garbage bags and gloves, volunteers spread out to wherever they wanted to go within the city limits, after a brief pep talk at city hall.
Everyone was invited to take pictures of themselves doing their civic duty, and even to post some of the more unusual items they found littered on the streets.
From what we saw, the most common item was face masks.
Come on folks, it’s great that you’re masking up, but try to make some effort to dispose of your mask properly.
Even if you couldn’t make the cleanup, residents are encouraged to clean up your own yard, alley and street – if not every day, then at least once a week.
Your city thanks you.
Posted May 20, 2022