Volunteers make a ‘clean sweep’ of the city 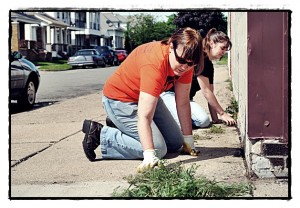 It was all sun and smiles last Saturday (May 15) for Hamtramck’s Clean Sweep.

About 125 volunteers showed up for the annual event, which covered all corners of the city. Armed with bags, brooms and rakes, teams of workers marched through the streets clearing trash, glass, trees and debris.

Around town several groups pitched in to spruce things up. About 50 MDOT employees took care of the Midtown neighborhood, and a visiting church helped Acts 29 knock out the 3c7 area. Students from Hamtramck High helped clean the school grounds, and even probates from the 31st District Court got in on the action, hitting several streets throughout the city.

In Veterans Memorial Park, a team from People’s Community Services added a nice brown coat of paint to the pavilion as people from the community serviced the surrounding park. Down the street, members of the Knights of Columbus painted over graffiti covering the viaducts.

Overall, it was a great effort, although one thing was decidedly missing – widespread participation from the community itself. Most of the volunteers were from out-of-town, which doesn’t say much for the level of involvement of the city. But despite that setback, the day was still successful according to event coordinator Eve Doster-Knepp.

“All-in-all everything went well,” she said. “The city looks better than it did and we really made a difference. I’m looking forward to next year.”