Voters are being warned about election law 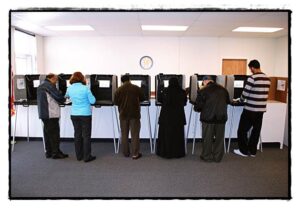 Voters are being warned to vote only once in each and every election. File photo

By Charles Sercombe
Don’t even think about voting twice.
Recently, President Trump came under criticism for encouraging voters in North Carolina to vote twice: one by absentee ballot, and again in person.
He’s suggesting this as a way to test the honor of the system, and whether communities can actually catch those who attempt to vote more than once, media reports said.
It’s not clear if the president was entirely serious, but his comments did raise alarms.
It is illegal to knowingly vote more than once in an election. In fact, it is a felony in most states.
Hamtramck City Clerk August Gitschlag blasted out a message on his Facebook page warning residents about the consequences of voting more than once.
“It is illegal to vote more than once in an election. I will catch you, your extra vote won’t count, and I will refer you for prosecution,” Gitschlag said.
He has been joined in this warning by Michigan Attorney General Dana Nessel, who sent out this email warning:
“Let me be perfectly clear: voting twice is illegal, no matter who tells you do to it. The president’s idea is a great one for people looking to go to jail,” said Nessel. “My office will prosecute to the fullest extent of the law anyone who intentionally flouts our election laws.”
Secretary of State Jocelyn Benson also chimed in with this response:
“Our election system has been stress-tested by three successful elections already this year, and in all of them proven that it is absolutely safe and secure,” said Benson. “We have protections in place to ensure election officials track and verify every ballot they send and receive, and, in every instance, we ensure that each person gets only one vote.”
Michigan voters will be heading to the polls on Nov. 3. Voter turnout for this election is expected to be huge, because it is a presidential election.
Gitschlag said, this week, that absentee ballots should be ready in the coming weeks.
Locally, Hamtramck voters will be faced with filling four school board seats as well as the state representative position for the district that includes Hamtramck.
Hamtramck resident Abraham Aiyash is the Democratic nominee in the state representative race, and he is expected to win the seat, since a majority of Hamtramck voters have voted Democratic for generations.
Sept. 11, 2020