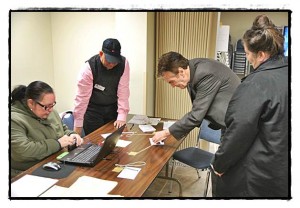 You could hardly tell there was an election on Tuesday in Hamtramck, but indeed there was one.

And what a weird one it was.

A paltry 645 voters participated in the presidential primary – less than one percent of the total 11,000 registered voters.

You could hardly blame anyone for ignoring this election, or even being oblivious to it. Hamtramck has long been known as a Democratic stronghold, and since President Obama is running unopposed, well, why bother?

But there were certainly a number of Democratic voters who were eager to participate – in the Republican side of the ticket.

Voters could only vote in one primary, the Republican ballot or the Democratic one, but not both.

Some 324 picked the Democratic ballot, casting 276 votes for Obama and 48 to “uncommitted.”

Hmmmm, are those disgruntled Democrats?

The remainder of voters split their support all over the Republican ticket, but a slim majority went with Rick Santorum (116 votes), and with Mitt Romney coming in close behind with 103 votes.

The statewide vote was equally close for Santorum and Romney, but Romney managed to edge out Santorum by 41 percent to 38 percent.

We managed to find a few voters, but that was like finding the proverbial needle in a haystack.

Berni Culester came to vote a little after 5 p.m. at the Senoir Plaza, where, conveniently, he lives.

“I circled Obama,” he said in broken English. “He’s the best.”

Also at the senior apartment building was Margaret Whitney Todd, who said she’s a former Democratic Party supporter, but not anymore.

“It’s not the party of Roosevelt and Truman,” she said in reference to former presidents Franklin Delano Roosevelt and Harry S Truman.

She said she voted for Romney.

Democrats were urged by some party leaders to cross over to the Republican ballot and purposely vote for Santorum, because that candidate is perceived to be the weakest when matched up against Obama.

Or so the opinion polls say.

This election also marked a historical first for Hamtramck and the country – yes, the country. City Clerk Ed Norris said it was the first time ballots were available in the native language of Bangladesh.

That’s a requirement the city was ordered to take by the Justice Department because the 2010 Census showed a significant enough Bangladeshi-American population to require it.

Not one ballot in Bangladeshi was requested, Norris said.

“This election wasn’t a very good test for it,” he said.

Norris also noted that, judging by the names of those who requested Republican or Democratic ballots, the city’s Bangladeshi-American community largely sat out this election.

That community has emerged in recent years as the city’s largest voting bloc.