‘Wall of Refuge’ packs a powerful tale at the Zen Center 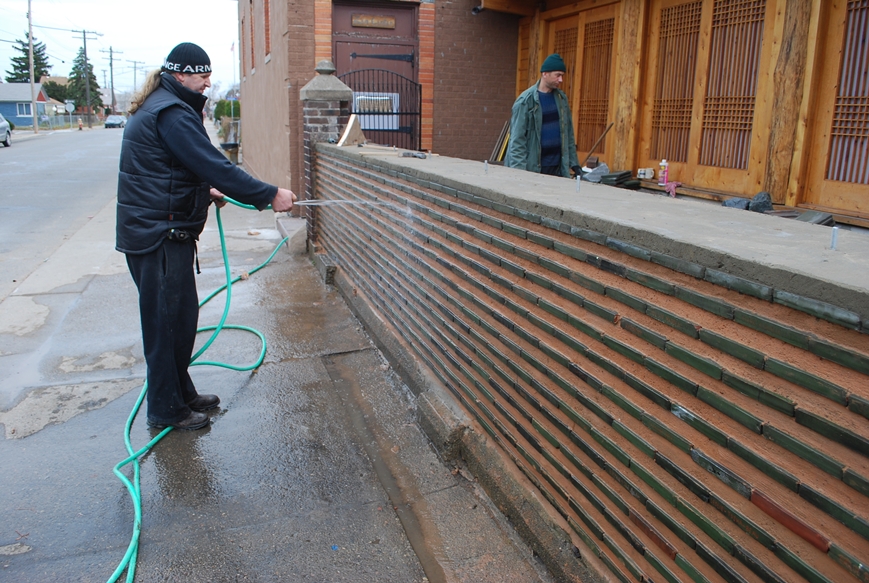 By Alan R. Madeleine
Review Specialwriter
Residents who pass by the Detroit Zen Center should notice a prominent change in the look of the building’s perimeter.
A wall, approximately four feet high and made of tile and adobe mortar, has sprung up along the sidewalk. The 4,200 grayish mission tiles used in the wall’s creation have quite a tale behind them.
They date from January of 1916, and were saved eight years ago from the re-roofing of a Grosse Pointe estate. Members of the Zen Center, along with others from the local Bosnian community, painstakingly shuttled each piece to a waiting truck. From there, they were stacked for safekeeping at the Center by volunteers. The resulting “Wall of Refuge,” as the Center is referring to it, has finally been made possible by a recent Kresge Arts Foundation grant. The project mimics the look of Korea’s Zen Buddhist mountain monasteries, the roofs and walls of which are often made of inscribed tiles.
Completing the tribute, the Zen Center has encouraged the inscribing of their own tiles by interested community members and passers-by. This public inscribing is continuing through the duration of the wall’s construction, expected to take until May or June of next year. All are welcome to participate, but Center Director Hillary Myungjiu cautions that you’ll have a better chance to do so if you come by on Thursdays, Fridays, or especially Saturdays between 9 a.m. and 5 p.m.
The Kresge Grant was invaluable, and something of a surprise for the Center, given the unusual nature of the project, but Myungjiu speculates that the message of unity inherent there may have won the grant panel over.
The Center is located at 11464 Mitchell at the southeast corner of Casmere. The Center also features Saturday morning yoga classes, and it’s Café and Food Co-op offer organic foods and natural home and health products. For more information, go to the Center’s website at detroitzencenter.org, or contact them by phone at (313) 366-7738.